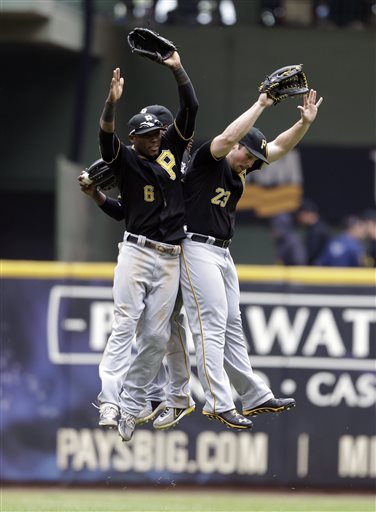 This appears to be a different Pittsburgh Pirates team than years past.  This weekend at Miller Park, they proved that just a little more, including a 5-4 victory over the Milwaukee Brewers this afternoon.

Wandy Rodriguez out-pitched Yovani Gallardo today in a sub-par performance from the Brewers ace.  The Buccos’ lefty won his sixth game of the season, giving up three runs on seven hits through his five innings of work.  Gallardo struggled with consistently, location, and efficiency, lasting only four innings against the Pirates offense, giving up four runs on five hits, losing his fifth game of the season.

The Pirates got on the board first this afternoon with some two-out magic in the second inning.  After the first two batters were retired, Michael McKenry drew a walk on a close full count pitch, and Jordy Mercer tripled him home to give the Bucs an early 1-0 lead.

Starling Marte led off the third with a double, and Neil Walker was then hit by a pitch.  After Andrew McCutchen hit into a fielder’s choice, the Pirates had runners on 1st and 3rd and only one out.  Garrett Jones’ sacrifice fly scored Marte, giving the Pirates a 2 run lead.  Gaby Sanchez then forced a four-pitch walk, and Pedro Alvarez then crushed a two-run double down the line, and all of a sudden, the Bucs had a 4-0 lead over a pitcher in Gallardo that had dominated them in the past.

The Brewers got themselves back in the game by taking advantage of a few Pirates mistakes.  Ryan Braun made the Bucs pay for it, smashing a three-run double, bringing the Brew Crew within a run at 4-3 after five innings.

But as they’ve done all season, the Bucs bounced back the very next inning.  McKenry led off with a double, and Jordy Mercer added a bloop single to put runners on first and third with no outs.  After a Brandon Inge strikeout, Marte hit a sacrifice fly just deep enough to center field, scoring McKenry.

The bullpen took over for Wandy in the sixth inning, and held onto the lead…but just barely.  Milwaukee did threaten in the seventh, but Braun grounded out with two runners on to end the threat.  Vin Mazzaro squeaked through the seventh without giving up a run, but Mark Melancon surrender a run, making it a 5-4 game.  Jason Grilli, though, set the Brewers down in order to secure the game, and series, victory.

This was a huge victory for the Pirates this afternoon.  As we all know, the Bucs have struggled significantly at Miller Park in the past.  It literally has been a house of horrors for the Bucs…but not this weekend.  As a team, the Bucs totaled ten hits, including three from Mercer and two each from Marte, McCutchen, and McKenry.  Alvarez added two RBI’s, now hitting at an even .200 clip.

After this successful weekend, the Bucs travel for a short two game series against the Detroit Tigers.  First pitch tomorrow is scheduled for 1:08pm.