Pirates Close First Half With Rout Of Giants 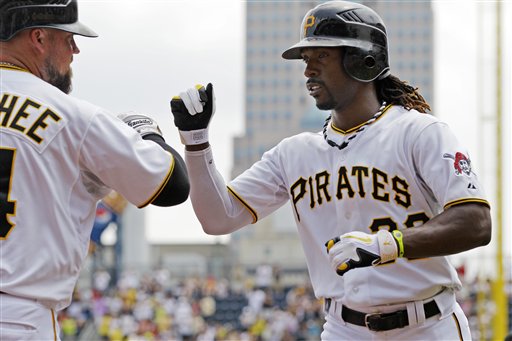 Pittsburgh fans have been chanting “MVP, MVP” for the past couple weeks in reference to Andrew McCutchen, who has truly emerged as one of the best players in the National League.  Today, on the last day before the All Star break, Cutch gave the fans at PNC Park one more reminder why he is one of the top players in baseball, going 3-5 including two homeruns as the Pirates blew out the San Francisco Giants, 13-2.

Cutch’s two homeruns and four RBI’s today give him 18 long balls and 60 RBI’s for the season, while bumping his average to an MLB-best .362.  All 18 of his homeruns have come since May 9.  Wow.

Neil Walker is on fire as well right now, and his 5-5 performance this afternoon, including a homerun, double, and three singles increased his hitting streak to 12 games and his average sits at .291 on the season.  Casey McGehee added three hits of his own today before leaving with what appeared to be a groin strain, while Clint Barmes also added a pair of knocks and an RBI.

As a team, the Pirates tallied a total of 17 hits.  For this series against the Giants, the Bucs scored a total of 21 runs, and after today’s win, they are now 11 games over .500 and enter the All Star break in first place in the N.L. Central.

Perhaps overshadowed by the offensive heroics of McCutchen and Walker, A.J. Burnett was once again impressive today, giving up just two runs on four hits through 6.1 innings, earning his 10th victory of the season.  Brad Lincoln tossed 2.2 innings of scoreless, hitless baseball, including the final out of the game, surrounded by thousands of standing fans.

For the Giants, Tim Lincecum’s horrible season continued today, as he gave up six runs on seven hits throughout 3.1 innings.  His ERA once again ballooned to 6.42 in this, his 10th loss of the season.  Pablo Sandoval provided the only offense for San Fran, hitting a two-run homerun in the seventh inning.

Something special is happening with this team right now, and more and more fans in the Pittsburgh area (and beyond) are realizing that this is a quality baseball team.  For months, we’ve been saying that with the high-quality of the pitching, when this offense finally starts to click, this will be an extremely dangerous team.  The offense is on right now and has been since June…and the Pirates have the best record in baseball because of it.

Pittsburghheads into the All Star break with a 48-37 record and is alone in the first place in the N.L. Central.  After four days off, the Bucs will head to Milwaukee for a three-game weekend series against the Brewers.