Pirates Come Up Short Against Padres In Series Finale 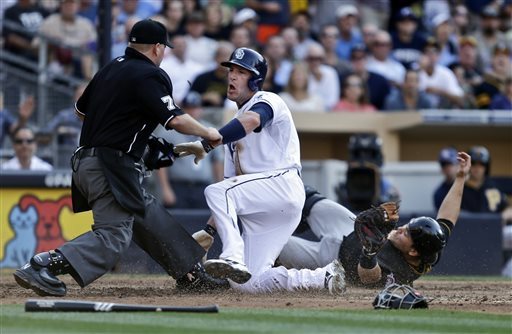 The Pittsburgh Pirates scored 11 runs in the first two games of this week’s series against the San Diego Padres to put themselves in position for a series sweep.  But today at Petco Park, the offense went back into hibernation against Padres’ starter Ian Kennedy, and Gerrit Cole surrendered one too many runs in a 2-1 loss.

The Pirates threatened early tonight against the Padres’ Ian Kennedy.  Andrew McCutchen hit a two-out single, and after back to back walks to Pedro Alvarez and Russell Martin, Kennedy faced Garrett Jones with the bases loaded in the first inning.  But the slumping Jones struck out on a fastball right down the middle to end the threat.

San Diego took the lead in the third inning.  After a leadoff double by Wil Venable, the Padres sacrificed and manufactured their way to a 1-0 lead.  They added another run off of Cole in the fifth inning, and the Padres seemed to be in control midway through the game.

After stumbling through seven innings against Kennedy, the Bucs got things started against the Padres’ bullpen.  Newly acquired Felix Pie led off with a walk, and advanced to second base on Neil Walker’s groundout.  After advancing to third on a passed ball, Pie scored on Andrew McCutchen’s sacrifice fly, cutting the Padres’ lead in half at 2-1.

Unfortunately, the Pirates couldn’t complete the comeback, going peacefully in the ninth inning against Huston Street.  Gaby Sanchez flew out to end the game, as the Padres salvaged the series and avoided the sweep.

Kennedy was on point today for San Diego, holding the Pirates to just four hits, two from McCutchen, through seven innings.  The Pirates’ best chance came in the first inning, when they loaded the bases but weren’t able to get a single run across.  From that point on, Kennedy settled in and shut the Pirates down.

As for Cole, he fell to 6-6 on the season, giving up two runs on ten hits through six innings.  Despite the high hit count, he did keep the Bucs in the game and certainly gave them a chance to come back late and maybe steal a win.   Nice appearances from Justin Wilson and Bryan Morris were very impressive in the losing effort.

So the Pirates miss out on a great chance to sweep the Padres.  The St. Louis Cardinals won their game this afternoon, closing the gap on the Pirates to just one game.