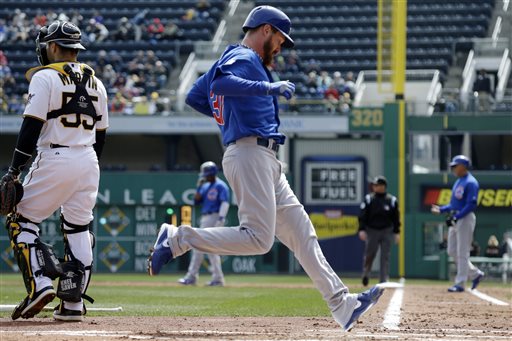 James McDonald, who has garnered a reputation as being wildly inconsistent in recent years, was solid this afternoon for Pittsburgh.  He pitched seven strong innings, giving up just one run on two hits with two walks and four strikeouts.  After allowing a one-out single to opposing pitcher Travis Wood in the third inning, Starlin Castro singled two batters later to push the first run of the game across the plate, giving the Cubs an early 1-0 lead.

All in all, it was a pitchers’ duel between Wood and McDonald up until they handed the game over to their respective bullpens.  After only one run and a handful of hits tallied through the first eight innings, the ninth frame was very eventful.  Nate Schierholtz gave the Cubbies some much needed insurance in the top of the inning with a two run homerun off reliever Jared Hughes.  As it turned out, Chicago would need every run they scored today.

The Bucs rallied in the ninth inning like they have so rarely done in the past, and actually put themselves in a strong position to win the game.  Starling Marte led off the inning with a single, and after a Russell Martin walk, Andrew McCutchen singled home Marte to get the Bucs on the board.  After Gaby Sanchez singled home Martin, the Pirates were within just one run, with runners on first and second and no outs.

Unfortunately, the comeback would come to a screeching halt.  With the crowd on their feet hoping for some late game heroics, Pedro Alvarez struck out swinging and Neil Walker grounded into a game-ending double play.  The Cubs’ closer Carlos Marmol escaped for his first save of the season.

This was a tough one to watch for Pirates’ fans.  The offense was stagnant for the entire game, and after a nice start in the ninth, came up short.  With two runners on base and no outs, we expect that Pedro Alvarez and Neil Walker can get at least one run home.  It didn’t happen today, much to the dismay of fans.  While it is only the third game of the season, this would have been a nice game (and series) to win before heading out west for an early season road trip that will test this team.

The Bucs will kick off a three game series against the Los Angeles Dodgers tomorrow.  Jonathan Sanchez will make his first start of the season.