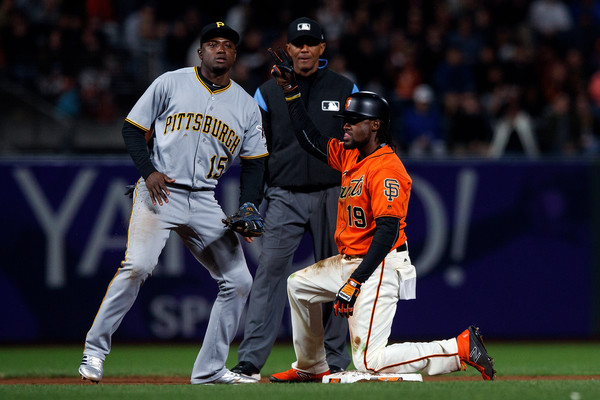 Holmes looked bad from the start of this game.  Andrew McCutchen would lead the game off with a solo home run to right field.  San Francisco would score two more runs in the inning and then four more in the third before Holmes night was officially over.  He would only pitch 2.2 innings, allowing seven runs on eight hits with four walks and one strikeout.

Another recent call up from Indianapolis came out of the bullpen to try to stop the bleeding.  Casey Sadler would work the next 3.1 innings and give up four runs on six hits with three walks and two strikeouts.  He was followed up by Kyle Crick, Crick pitched the seventh inning and gave up one run on one hit with one strikeout and one walk.  The eighth inning belonged to Richard Rodriguez who also allowed one run on one hit, but walked three and struck out two.

The Pirates offense did their best to keep the team in the game.  It started when Jordy Mercer drove in runs in the second and fourth innings.  David Freese would collect an RBI in the fifth on a single to center.  Francisco Cervelli would smack a grand slam in the seventh to get the Buccos within four runs.  Colin Moran then hit an RBI triple in the eighth and came in to score on a Cervelli single to center.  The newly acquired Adeiny Hechavarria would hit a solo home run in the ninth for the final run of the game.

I like to give Clint Hurdle the benefit of the doubt when it comes to making lineup changes, unless they involve Sean Rodriguez, but this backfired immensely tonight.  Pittsburgh will need to win these next two games to take the heat off their manager for this one.  Trevor Williams will start for the Pirates tonight and hopefully he can make it through six or seven innings to give the bullpen a rest after this disaster.