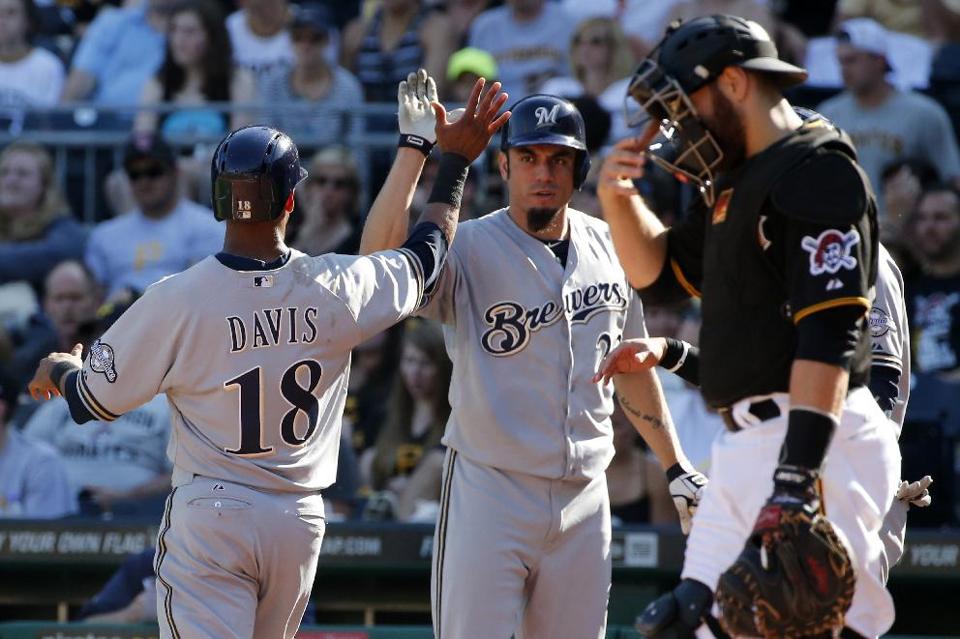 Everything seemed to go right for the Pittsburgh Pirates last night in their 15-5 blowout victory over the Milwaukee Brewers at PNC Park.  Tonight, everything seemed to go wrong, and the result was a 9-3 loss to the Brew Crew in the second game of the three game weekend series on the North Shore.

Edinson Volquez lost his fifth game of the season (3-5) thanks, in large part, to the defense committing five errors, and the Brewers broke up a once tight game in the latter innings on their way to a comfortable win over the Bucs, 9-3.

Volquez gave up four runs (three earned) on four hits with two walks and four strikeouts through six innings.  Justin Wilson was tagged for four earned runs on just one hit and two walks, while Jeanmar Gomez also gave up a run in relief.  Pedro Alvarez led the Pirates’ offense with two hits, but his defensive lapses were the most memorable aspects of this loss.

Pittsburgh committed three errors in the first inning.  Jean Segura led off with a walk.  Volquez attempted to pick Segura off first, but he threw the ball away.  Ike Davis tried to throw Segura out at second, but he threw that ball away as well.  The end result was a sacrifice fly by Jonathan Lucroy, giving the Brewers an early 1-0 lead.

The Pirates took the lead in the third inning on a two run single by Alvarez with the bases loaded, scoring Andrew McCutchen and Neil Walker.  But the lead wouldn’t last long.  In the top of the fourth, the Brewers scored three runs and wouldn’t look back the rest of the game.  Khris Davis crushed a ground rule double to left, scoring Lucroy.  Then, later in the inning, with the bases loaded, ex-Bucco Lyle Overway single home Davis and Aramis Ramirez to put the Brewers in front, 4-2.

After the Pirates scored a run in the sixth to make it a one-run game, Milwaukee broke it open for good in the eighth.  Rickie Weeks grounded into a fielder’s choice, scoring Davis.  Then Segura singled home Scooter Gennett.  Finally, everyone’s least favorite player, Ryan Braun, doubled to deep right, scoring Weeks and Segura.  The Brew-Crew added another run in the ninth for good measure, increasing the lead to 9-3, which would be the final.

This was a horrible game for the Pirates from the very beginning.  For a team that looked like they had it all figured out last night, they sure regressed about as much as one could expect in tonight’s game.  These defensive lapses, miscues, and poor decisions are things that should not exist on a professional baseball team.  The Pirates’ offense is not good enough to make up for these types of errors, and we’re seeing what can happen when opposing teams take advantage of opportunities.

The Pirates and Brewers will face off tomorrow afternoon in the rubber match of the series.  Charlie Morton will take the mound for the Bucs against Milwaukee’s Yovani Gallardo.  First pitch is scheduled for 1:35pm.