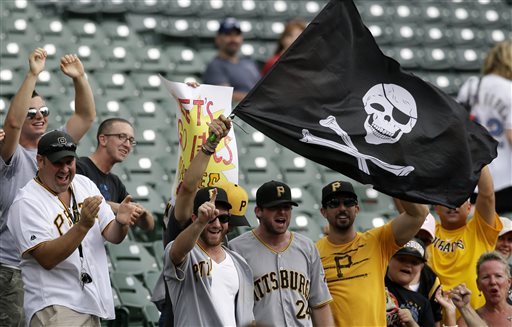 One of the common themes of the Pittsburgh Pirates 2013 season has been their ability to respond to adversity.  After losing three straight games in St. Louis to fall out of first place in the N.L. Central, the Bucs were faced with the difficult task of playing the Texas Rangers in Arlington.  But now, as they’re on their flight ride back to Pittsburgh, the Pirates have once again answered the bell, completing a three-game sweep of the Rangers with a 7-5 victory this afternoon.

A.J. Burnett was solid early, and the Pirates offense stayed hot, getting off to an early lead and holding on late against yet another late surge by the Rangers to clinch the series sweep.  The Bucs’ starter gave up five runs on six hits through 6.1 innings, while Kyle Farnsworth earned his first save as a Bucco with a 1-2-3 ninth inning.

Justin Morneau led the Pirates with four hits, while Marlon Byrd added two hits.  Clint Barmes had a hit and two RBIs for the Bucs, who collected 12 hits as a team.  Although they were unable to come through with that one key hit, the Pirates won this game by manufacturing runs. They scored one run in the third, two in the fourth, and one in the fifth to get out to a comfortable lead.

While the Rangers responded in the latter innings, making things very interesting, the Pirates answered the bell each time, finally shutting the home team down in the eighth and ninth frames.

This was a huge series for the Pirates.  After their dreadful performance last weekend in St. Louis, they did exactly what they needed to do in Arlington.  The Pirates are currently a half game out of first place, with their final home stand of the season beginning tomorrow night against the Chicago Cubs at PNC Park.