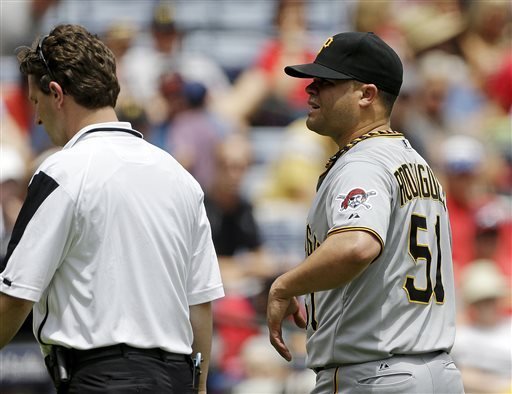 Well it’s safe to say the Pittsburgh Pirates are not playing good baseball right now.  After their 5-0 loss this afternoon, completing a three-game series sweep at the hands of the Atlanta Braves, the Bucs have now lost five of six games and have been struggling to score runs, while the injury bug appears to be floating up and down the starting pitching rotation.

Wandy Rodriguez lasted for only one out this afternoon before leaving with tightness in his left forearm.  He gave up two hits, one run, and hit a batter with a pitch while recording only one out before leaving.  Rather than traveling to Chicago with the team after today’s game, Wandy returned to Pittsburgh for examination.

Bryan Morris pitched 3.2 innings without giving up a hit.  Vin Mazzaro and Jared Hughes, however, struggled, giving up two runs each.  The Braves scored a pair of runs in the sixth and seventh innings to distance themselves from a Pirates team that was completely overmatched by the opposing starting pitcher.

Julio Teheran was dominant today for the Braves, taking a no-hitter deep into the game.  Brandon Inge, who broke up the no-hit bid in the eighth inning with a pinch-hit single, tallying the Pirates only hit of the entire game.

There really isn’t much to say about today’s game.  The Pirates aren’t playing well, and they are losing games because of it.  Sure, we can complain about the starting pitching and the bullpen giving up more runs than we have grown accustomed to over the first couple months of the season.  But the bottom line is, the offense is severely struggling to score runs.  Sure, this is a long season and every team runs into lags and slumps, but as we’ve seen in previous season, things can spiral out of control quickly for the Bucs.  This slide needs to stop NOW.

The Pirates travel to Wrigley Field for a series against the Chicago Cubs.  While the Cubbies are one of the weaker teams in the league, they always play well against the Bucs.