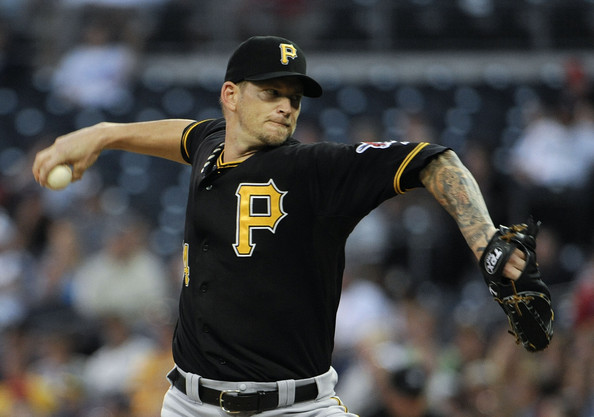 The National League West has not been kind to the Pittsburgh Pirates this year, but after two games against the San Diego Padres, they seem to be turning the page.  With tonight’s 8-1 win, the Buccos have earned a series win and look to be on their way to a successful road trip.

Pittsburgh hit the ground running tonight with two runs in the first inning. Neil Walker hit a solo home run to open the scoring, and that was followed up by a Russell Martin RBI double for run number two.  The first of three run scoring triples occurred in the third inning when Pedro Alvarez brought in Walker with a three bagger.

A.J. Burnett looked like the pitcher that has won the hearts of all Pirates fans tonight.  Burnett would last seven strong, giving up one run on four hits, while striking out seven and walking one.  That lone run was a solo homer off the bat of Jedd Gyorko.

Vin Mazzaro would come out of the pen to pitch a scorless eighth inning.  He would allow one hit and strike out a batter.  That would lead to Jared Hughes pitching the ninth inning.  Hughes allowed one hit, but no damage was done.

The seventh inning was the breakout inning that capped the win for the Buccos.  With runners on second and third, Andrew McCutchen would hit a triple to right center field for two runs.  Pittsburgh would then load the bases for pinch hitter Josh Harrison.  Harrison took a two strike pitch to deep right center for a three RBI stand up triple.

Great win for the Pirates who pick up their first series win after dropping their last three.  With the win the Buccos improve their N.L. Central lead to two games after the St. Louis Cardinals lost today.  These two teams will wrap up their series at PetCo Park tomorrow at 6:40pm with Gerritt Cole taking the hill for Pittsburgh.