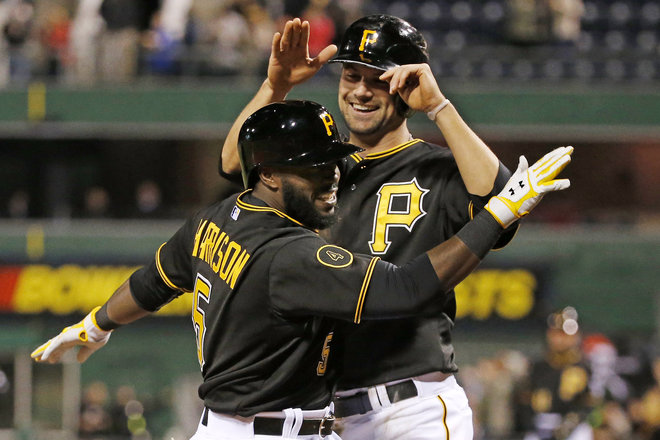 It is amazing what a good night sleep in your own bed will do.  Coming home to PNC Park after a 3-6 road trip, the Pittsburgh Pirates were looking to get back in the win column, in front of 17,000 fans, against the red hot Milwaukee Brewers.

Milwaukee was able to get the best of Pittsburgh in a three game sweep on their home turf a week ago, but the Pirates appear to be a different team at home.  They would show that tonight with a great performance from the offense, defense, and pitching.

Edison Volquez pitched his best game in a Bucco uniform to date tonight.   He would last seven innings, allowing two runs on eight hits, while walking one and striking out three.  Those two runs came in the first and third innings on RBI singles with a runner on second.  Other than that Volquez was able to stay out of jams, while spreading those hits out throughout the game and avoiding a big inning.

The Pittsburgh bats were again hitting the longball and it started in the first inning.  Andrew McCutchen hit his first home run of the season to give the Pirates a 2-1 lead.  With the score tied in the seventh, Josh Harrison would hit a pinch hit two run shot that proved to be the game winner.  McCutchen would add a run on a fielder’s choice to push the Bucco lead to 5-2.

The eighth inning was icing on the cake for the Pirates faithful.  Gaby Sanchez hit a homer off the foul pole to get the scoring started.  Jose Tabata then brought in Jordy Mercer on a double to deep right field.  Russell Martin got in on the act with a single to left that plated run number eight.  The Big Bull came to bat with runners on first and second and then flexed his muscles.  Pedro Alvarez hit an opposite field bomb that pushed the Bucco lead to 11-2, which ended up as the final.

After Volquez came out, Mark Melancon would pitch a 1-2-3 eighth for his sixth hold of the season.  With no save available, Clint Hurdle brought Bryan Morris out of the pen and copied what Melancon did in the previous inning to Raise The Jolly Roger!

Great start to what is an important eight game home stand against two tough division opponents.  Pittsburgh will look to keep this momentum rolling tomorrow night when Charlie Morton takes the bump to face Kyle Losch.