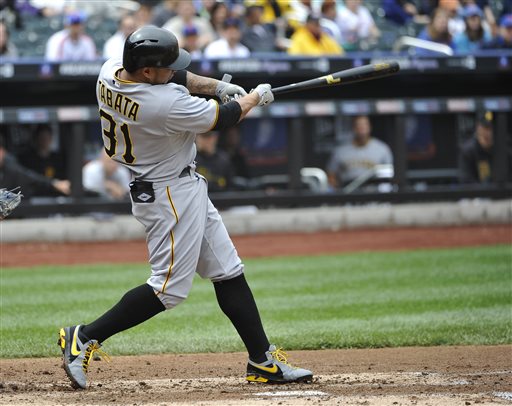 What a difference a day makes? Or a couple of days that is. After giving their starters little support earlier in the week, the Pittsburgh Pirates pounded the ball all over Citi Field today as they would defeat the New York Mets 11-1.

Today marked the Pittsburgh debut for starter Francisco Liriano and he showed little rust since being out of the lineup with a broken right arm. He would pitch 5.1 innings allowing one run on six hits, while striking out nine and walking two. Even though he has struggled in recent seasons, Liriano has the potential to add another veteran arm to this rotation and be a mentor for the younger arms on the team. If he can continue to build on this start it will only make the starters that much more of a hassle to opposing teams.

Liriano was quieting the Mets bats, the Bucco offense was making noise throughout this game. Clint Barmes started the scoring with a RBI single in the second. He would add another RBI in the fifth on another single and finish the day 2-4. Two more runs crossed in the third when Andrew McCutchen singled and was brought home on a Jose Tabata two run homer. Tabata had a big day going 3-4 with three RBI.

The fifth inning is when Pittsburgh finished off New York. Five runs would cross the plate, which was all started by Jordy Mercer homering to deep left center. It would be the first of two homers for Mercer, his second would come in the eighth. Mercer is making a case to stay on the big league roster, as Neil Walker is expected to come off the DL tomorrow.

With today’s win the Pirates earn at least a split in this series. Runs may be a little hard to come by tomorrow as the Mets will send their best starter Matt Harvey to the hill. Harvey is 4-0 and has posted a 1.28 ERA this year. Pittsburgh will need to capitalize on any opportunites they are given tomorrow in order to pick up the win. The Buccos will send Jeanmar Gomez to the bump tomorrow as he is coming off a quality spot start on Tuesday night.