Pirates Dominate Cardinals In Game One Of Series 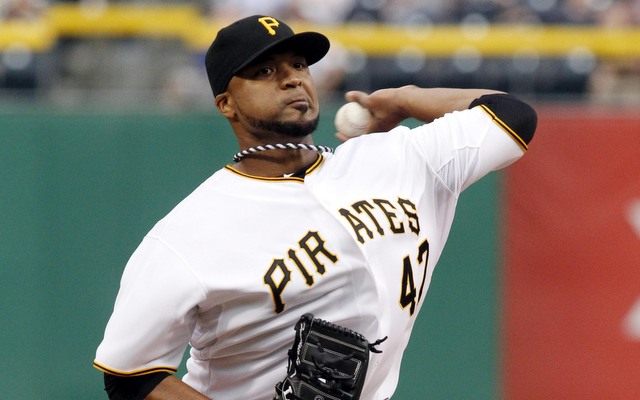 Tonight marked the beginning of the biggest series in the history of PNC Park.  Five games between the first place St. Louis Cardinals and the second place Pittsburgh Pirates, who entered tonight 1.5 games out of first place.  Coming into tonight, the Buccos offense continued to struggle, but they continued to receive stellar defense and pitching to stay in the Central Division race.

When Pittsburgh came to bat in the first they immediately showed that they are not going to back down to the mighty Cardinals.  After a walk and a hit batter, Andrew McCutchen drove in a run with a single to center.  Pedro Alvarez stepped up next and emptied the bases with a three run homer to right.  The bats came to life again in the seventh with five more runs.  Gaby Sanchez hit a sac fly, yes I said a sac fly, for the first run, Alex Presley, who was called up from AAA today singled home a run, which would led to Clint Barmes bringing in two runs with a double to center, Starling Marte then hit a pinch hit single for the ninth and final run of the game for the Pirates.

Francisco Liriano started tonight and showed why he may be the best signing in all of baseball this year.  He would work seven innings allowing one run on four hits, while walking two and striking out eight.  The lone run came in the sixth inning, when after a lead off triple, Matt Carpenter would single in the runner from third.

The bullpen shut the door over the final two innings, but not with a little work in the final frame.  Tony Watson worked the eighth inning and was flawless, striking out one batter.  Vic Black worked the ninth and showed why he still has some work to do before he is a mainstay at the big league level.  With the bases loaded he allowed a single for the Cards second run of the game, but would collect a strike out and a fly out to give the Pirates a 9-2 win tonight.

There is really no better way to start this series.  The offense poured it on, the pitching was top notch, and the defense covered the ground they needed to.   These two teams will play two tomorrow and will see all the other has to offer during those two games.  Game one will start at 4:05pm, with game two starting thirty minutes after completion of the first game.