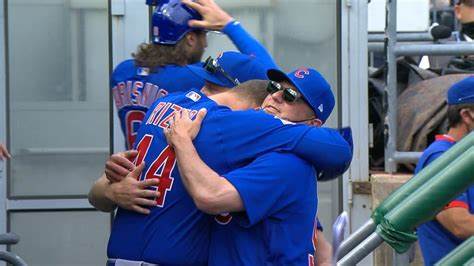 Tyler Anderson made the start today for Pittsburgh and was able to work through 5.1 innings.  He would give up three runs on ten hits to go with five strikeouts.  That line isn’t great, but for the Pirates it is great compared to some of the starts they have had this season.  Kris Bryant started the scoring for Chicago with a solo home run in the first.  The other two runs that Anderson would be charged with occurred on a two run homer from Javier Baez in the sixth.

Bucco killer Jake Arrieta made the start for the Cubs, and was able to keep Pittsburgh in check during his six innings on the mound.  He would allow two runs on seven hits to go with four strikeouts and three walks.  Both of those runs would come around to score in the fourth inning.  Dustin Fowler would hit a sac fly to right to bring in Gregory Polanco.  The Pirates took their only lead of the day when Adam Frazier hit a RBI single to right to score Jacob Stallings.

Clay Holmes finished off the rest of the sixth inning, collecting one strikeout, while Kyle Crick worked the next 1.1 innings striking out a batter.  The Cubs picked up an insurance run in the eighth on their third home run of the day.  This one would come off the bat of Anthony Rizzo.  Sam Howard was on the bump for that homer.  He would then walk a batter before being lifted for David Bednar.  Bednar, the Mars native, got the final out of the eighth in front of family and friends.

Richard Rodriguez worked the ninth for Pittsburgh, before the offense came to bat in the bottom part of the inning.  Unfortunately, the offense had no answer for Chicago closer Craig Kimbrel.  Kimbrel worked 1.2 innings, striking out three batters and earning his second save of the season, sending the Pirates to a sixth straight loss.

The offensive highlight of the day was Polanco and Frazier each collecting two hits apiece, not that it mattered much.  Fortunately for Bucco Nation this team cannot lose tomorrow, since it is an off day.  They will be back in action against the Cubs on Saturday for a 6:35pm tilt.  The Pirates will send Mitch Keller to the mound, while Chicago will counter with Zach Davies.