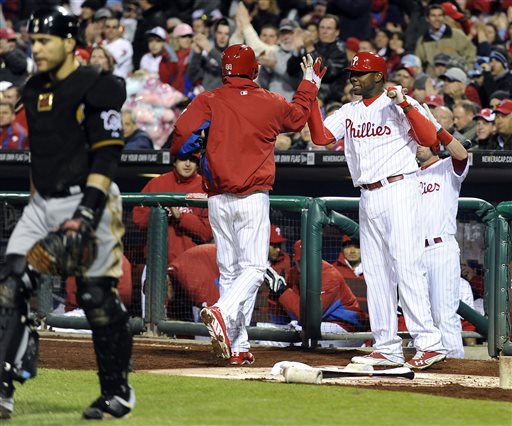 After a successful home stand, the Pittsburgh Pirates hit the road for a ten game road trip that began tonight against the Philadelphia Phillies.  Pittsburgh was looking for a solid night out of their starter A.J. Burnett since their bullpen ate quite a few innings on Sunday.  Philadelphia would be handing the ball over to rookie Jonathan Pettibone, who was making his big league debut.

The Pirates struck first in the ball game when Pedro Alvarez hit a line drive home run to right field.  This would be the first homer of the game for the Buccos.  The second and final run for Pittsburgh came in the fifth inning when Russell Martin hit a solo shot to left field.

The Phillies earned their first two runs of the game in odd ways.  Pettibone led off the third inning with a walk and then scored on wild pitch.  The fourth inning would see Jimmy Rollins get hit by a pitch with the bases loaded.

The way these runs were scored, show that Burnett did not have his best stuff tonight.  He would only last five innings allowing two runs on five hits while walking three and striking out seven.  Would be nice to see a veteran like A.J. go deeper into the ball game, especially with how the back end of the rotation has been inconsistent this season.

Philadelphia took the lead for good in the sixth when Rollins singled in former Bucco Erik Kratz.  Jonathan Paplebon came into close out the night as he got Alvarez to look at strike three with the tying run stranded at second.

Tough loss for the Buccos.  If a few things go their way and they take advantage of few situations, this could have been a win for them.  But, it is a long season and games like this pop up along the way.  These two teams will battle it out again tomorrow night as Jeff Locke will pitch for Pittsburgh and Philadelphia will counter with Cole Hamels.  First pitch is scheduled for 7:05pm.