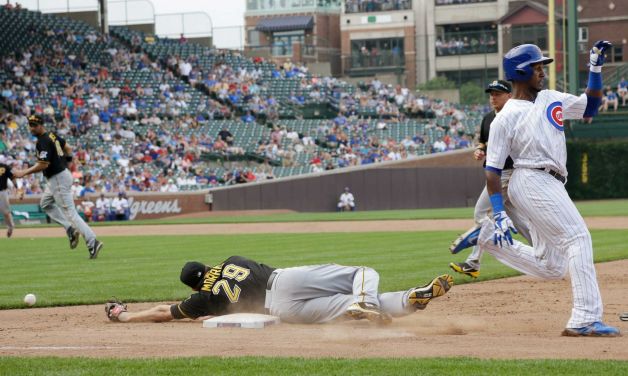 A.J. Burnett made his return to the Pittsburgh Pirates starting rotation today against the Chicago Cubs at Wrigley Field.  Unfortunately, his return was spoiled by a game full of missed opportunities, as the Bucs fell to the Cubs, 4-3 in 11 innings in Chicago.

Burnett gave up two runs (one earned) on three hits in five innings.  Offensively, the Bucs had plenty of opportunities to score runs, but they simply weren’t able to cash in on those chances.  Jose Tabata, Andrew McCutchen, and Pedro Alvarez each had two hits, and Starling Marte hammered a solo homerun in the ninth inning.  As a team, the Pirates had nine hits and left a total of 17 runners on base.

After falling behind early, the Pirates got on the board in the fourth inning on back to back doubles by Tabata and McCutchen lead off the frame.  After Garrett Jones’ groundout moved Cutch over to third, the Bucs had a runner in scoring position with only one out.  Unfortunately, Alvarez struck out, and, after Russell Martin drew a walk, Brandon Inge grounded out to end the inning.

Burnett got things going the very next inning with a one-out single.  After Marte grounded into a fielder’s choice, Tabata hammered an RBI-double off the wall to tie the game, 2-2.  The trend continued in the sixth inning, as Alvarez led off with an infield single, and Martin drew another walk to put runners on first and second with no outs.  Inge’s sacrifice bunt put two runners in scoring position, but Jordy Mercer hit into a fielder’s choice, nailing Alvarez out at home, and Gaby Sanchez struck out to end the inning with the game still tied.

After a solo homerun by  Scott Hairston gave the Cubs a 3-2 lead, the Pirates looked as though they were going to lose the game, and the series, at Wrigley.  But with the crowd on their feet and a full count, Marte crushed a solo homerun to deep center field, silencing the fans and tying the game.

Dioner Navarro’s sacrifice fly scored Anthony Rizzo to give the Cubs a 4-3 victory in the bottom of the 11th inning.  As impressive as it was, and has been all season, for the Pirates to not give up down the stretch and fight back, they still dropped a game today against a team that is not up to par from a talent standpoint.

The Bucs have now dropped two straight series and are not playing the type of baseball worthy of being at the top of the N.L. Central division.  These past two series were very winnable for the Bucs, but if anything, the past six games have proven that, regardless of who the Pirates play, from the best to the worst record-wise, they need to play good baseball to win games.

The Pirates will return home to Pittsburgh for the start of a three game series at PNC Park against the Oakland A’s.  First pitch is scheduled for 7:05pm.