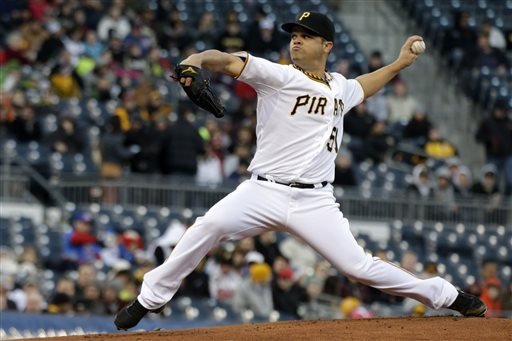 It was a cold night at PNC Park, but that didn’t stop 27,667 fans from showing up to watch game two of this three game series between the Pittsburgh Pirates and Chicago Cubs.  Like the season opener, this was once again a pitchers duel.

Wandy Rodriguez pitched very well tonight for the Buccos as he lasted 6.2 innings allowing two hits, while striking out six batters and walking one.  This kind of consistency out of Rodriguez would be huge for the 2013 Pirates.

The Cubs Edwin Jackson pitched well through three innings, but in the fourth the Pittsburgh offense would strike for two runs.  Andrew McCutchen would double home Garrett Jones for the first run, then two batters later Cutch would score on a fielding error by Starlin Castro off the bat of Gaby Sanchez.

The final run of the game came in the seventh inning off of the bat of Starling Marte when he singled home Clint Barmes.  Tony Watson bridged the gap between Rodriguez and closer Jason Grilli, by pitching 1.1 innings out of the bullpen.  Grilli then flashed his magic in the ninth by going 1-2-3, while striking out two batters.

First win of the year is always important, and now Pittsburgh has the chance to win this series tomorrow afternoon at 12:35pm.  James McDonald will take the bump for the Buccos, while the Cubs will counter with Travis Wood.