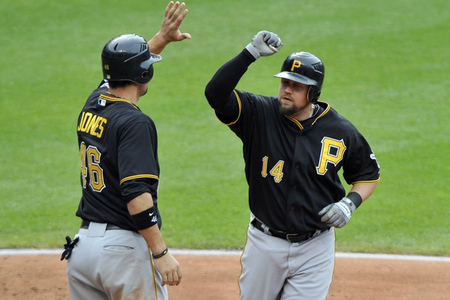 The Pirates hadn’t played their best baseball through the first three games of their series against the Philadelphia Phillies at Citizens Bank Park.  However, after dropping games on Monday and Tuesday, the Bucs held on last night for a wild 11-7 victory, giving themselves a chance to earn a split with another win this afternoon.

The offense exploded last night for 11 runs, and they came today with the same mentality apparently.  They tagged Phillies’ starter Kyle Kendrick for five runs in the first inning, headlined by a three-run homerun by Casey McGehee and a solo homerun by Pedro Alvarez.  Garrett Jones also added an RBI single.

Unfortunately for the Pirates, Kendrick settled down after the first inning, and gave up just two hits over the next six innings.  He lasted seven frames, but put his team behind the eight-ball from the very beginning.

A.J. Burnett, given a five-run lead before he even through a pitch today, managed the Phillies’ potentially explosive offense well for the most part.  Other than a two-run homerun surrendered to Erik Kratz in the second inning, A.J. pitched well, handling situations well with runners on base and getting himself out of potential jams.  He lasted 6.2 innings, giving up three runs on six hits, on his way to winning his ninth game of the season.

After Juan Cruz got A.J. and the Bucs out of the seventh inning, Jason Grilli came on for the eighth, and had anything but an easy outing.  After giving up a leadoff homerun to Hunter Pence, which cut the lead to 5-4, he put two more runners on base with only one out.  But, as he’s done so often this year, Grilli stepped up in the big moment, striking out Jim Thome and getting Carlos Ruiz to pop out to end the inning with the Pirates still hanging on to a one-run lead.

Joel Hanrahan, looking for his 20th save, had a nail-biting appearance of his own this afternoon.  But after giving up a leadoff single to Jimmy Rollins, getting two outs as Rollins advanced to third base, Hanrahan got Pence to fly out to end the game.

It’s difficult to put into perspective how important this series was for the Pirates.  After losing the first two games of the series, many people wondered if this would, indeed, be the turning point of the season when the Pirates fold and hit their losing streak, which is exactly what happened last season after their series in Philadelphia.  But, as Clint Hurdle and his players have attested, maybe this is a different team.

The Phillies offense had opened up against the Pirates’ starters in game one and two, but not so in the final two games.  James McDonald and A.J. Burnett held them in check for most of the game…and the Bucs leave Philadelphia with a series split.

Four games down, three to go in this highly contested road trip for the Bucs.  They’ll head to St. Louis next for a weekend date with the Cardinals.