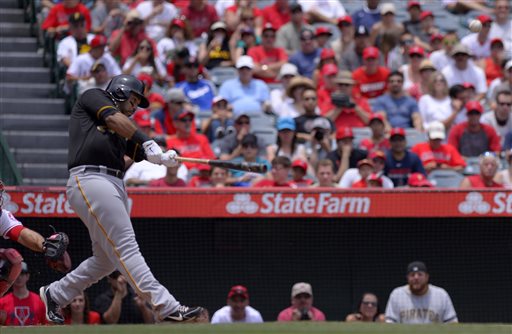 There is nothing in the MLB standing for style points and that is a good thing, because today’s victory over the Los Angeles Angels had its pretty and ugly moments.  The Pittsburgh Pirates battled from beginning to end and used the entire bench, which shows that on this team you have to be ready to play at any moment.

The Buccos were able to jump on the board in the first inning with a Pedro Alvarez solo home run.  That lead would not last long because of the Halos scoring five runs of their own in the second inning.  Pittsburgh was able to counter in the third thanks to a Howie Kendrick fielding error that allowed Starling Marte to score.  Gaby Sanchez would then bring in Garrett Jones to cut the LA lead to 5-3.

The Angels then got one of those runs back in the bottom part of the fourth to go up 6-3.  Pirates starter Charlie Morton would only last 5.2 innings today, but some shaky defense did not help his cause.  Of the six runs given up, only three were earned.  He would also walk and strikeout five batters.

It was not looking good for the Buccos as they headed into the ninth inning down three runs.  Andrew McCutchen, who had most of the day off, would hit into a fielder’s choice to bring home Neil Walker.  Cutch would come around to score when Russell Martin doubled to left field.  Down to their final out with two strikes, Marte singled home Martin to tie the game.

Mark Melancon would work the ninth inning and shutdown the Halos to force extra innings.  Pittsburgh did not wait around in extras  to get the job done.  Travis Snider would step to the plate with the bases loaded and single to left field to score two runs.  A throwing error would allow him to advance to second and run number three to come home.  Martin then put run number ten on the board with another single to left.

Jason Grilli would then enter the game and while usually the Grill Master is lights out, today he kept us all on the edge of our seats.  LA would score three runs to cut the Pirates lead to 10-9.  Mike Trout would then come to the plate with runners on second and third with two outs.   That is when Grilli showed what he is truly made of, as he struck out Trout to complete the sweep.

This was another key win for the Buccos today, as they had their backs to the wall on many occasions, but kept battling.  That may just be another sign of this year being different than the previous two decades.  Pittsburgh will have tomorrow off before beginning a quick two game series against the Seattle Mariners on Tuesday.