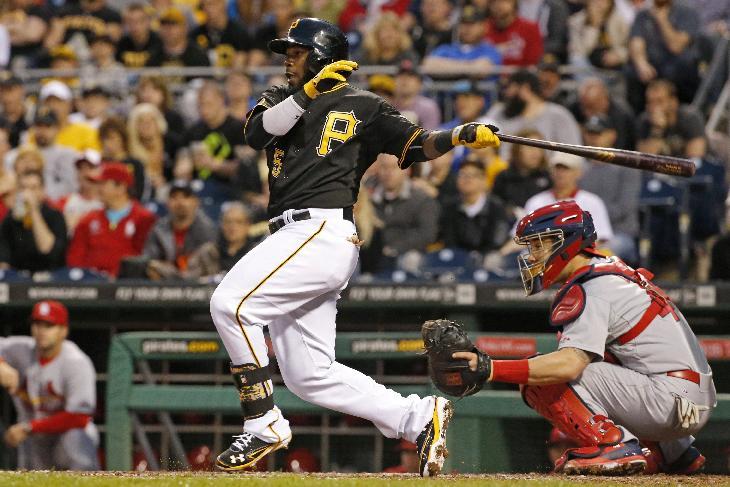 For the second consecutive night, the Pittsburgh Pirates traded punches with the St. Louis Cardinals…and once again, the Bucs outlasted their division rivals in front of a PNC Park crowd on Saturday.

Mound opponents Lance Lynn and Edinson Volquez struggled tonight against the opposing offenses, with neither pitcher lasting more than six innings.  Lynn gave up four runs on nine hits with two walks through six innings, while Volquez gave up three runs on four hits with four walks in 4.2 innings.  In all, the two clubs used a total of nine pitchers for strategic purposes.

The Cardinals jumped out in front early in the second inning while tallying only two hits.  Allen Craig led off with a single, and Matt Adams walked.  Mark Ellis smacked an RBI single, scoring Craig.  Tony Cruz grounded into a double play, allowing Adams to score from third.  Ellis would later score on a wild pitch from Volquez.  St. Louis was out on top, 3-0, and it looked like it could be a long night for the Buccos.

Pittsburgh came back and took the lead in the bottom of the fourth inning with some timely hitting a little bit of luck.  Volquez’s ground out with the bases loaded scored Ike Davis.  Josh Harrison singled off Lynn on a ball that died in front of second base, allowing Jordy Mercer to score.  Later in the inning, with the game tied, Pedro Alvarez smacked a single up the middle, scoring Harrison and giving the Bucs a 4-3 lead.

Throughout the remainder of the game, the Pirates and Cards had other opportunities to score, but neither could capitalize.  The Pirates bullpen did a solid job of keeping them in the lead.  Jared Hughes, Justin Wilson, Bryan Morris, and Tony Watson got them to the ninth inning, when Mark Melancon struck out Craig with two runners on to secure his fourth save of the season.

This was a huge win for the Pirates.  Any time you can win a series against a high quality divisional opponent like the Cardinals, you’ll take it.  The Bucs are 6-2 on this home stand, and they have a huge opportunity to sweep the Cards tomorrow night in primetime on ESPN’s Sunday Night Baseball.  Shelby Miller will take the mound for St. Louis against Charlie Morton for Pittsburgh.  First pitch is scheduled for 8:05pm.