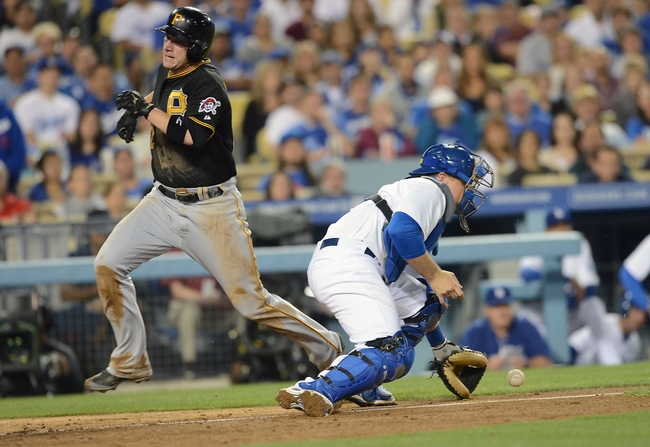 On paper, the Pittsburgh Pirates looked significantly overmatched entering this series against the Los Angeles Dodgers.  But after two games in L.A., the Bucs have gotten the best of the home team, outpitching and out-hitting them on back-to-back nights.

Francisco Liriano flirted with disaster but held the Dodgers in check, Ike Davis hit his fourth homerun of the season, and the Pirates held off the Dodgers for a 2-1 victory.

Liriano earned his first victory of the season, giving up five hits, walking two and striking out eight in 5.2 innings of work.  Justin Wilson, Tony Watson, and Mark Melancon set the table for closer Jason Grilli, who set the Dodgers down in the ninth, securing the victory.

The Pirates scored the game’s first run off Josh Beckett in a roller coaster ride of a top of the third inning.  Starling Marte was hit by a pitch to lead off the inning, and advanced to second base on a Clint Barmes walk.  Marte was then picked off second base, and Liriano couldn’t get a bunt down, resulting in a strikeout.  But with two outs and a runner on first, Josh Harrison singled to extend the inning.  Neil Walker followed with an RBI single to score Barmes, giving the Bucs a 1-0 lead.

Davis crushed a solo homerun to kick off the fourth inning to give the Pirates a 2-0 lead.  Despite a strong on base percentage, the Pirates’ first baseman has been lacking power since coming over to Pittsburgh in a trade earlier this season.  Tonight’s homerun was a welcomed sight for Bucco fans.

The Dodgers had plenty of opportunities to score runs off Liriano tonight, but they weren’t able to come through with runners in scoring position.  Yasiel Puig led off the fourth inning with an infield single and advanced to second on an error.  But Liriano struck out the next two batters and induced a ground out to end the inning.  Similarly, Hanley Ramirez led off the sixth inning with a double, but once again, L.A. couldn’t find a way to get the run home.

But the Dodgers’ best chance to score came in the fifth inning.  Andre Ethier led off the frame with a double.  After back to back outs, a single and a walk, Puig stepped to the plate with the bases loaded.  Liriano induced a pop out from the Dodgers’ right fielder to end the threat.

The Bucs finally did give up a run to the home team in the eighth inning.  Chone Figgins led off with a single, and after a Puig ground out, Ramriez singled Figgins home, getting the Dodgers on the board and cutting the lead in half.  But Mark Melancon got Matt Kemp and Adrian Gonzalez to ground out, keeping the Bucs’ 2-1 intact.

This Pirates team continues to surprise me.  After playing good baseball at home, they struggle against New York Mets team, then come to Los Angeles and take the first two games over a far superior Dodgers club.  It was a great sign to see Liriano have a quality start, and the pitching staff, the starters to the bullpen, have held this L.A. offense to four runs in two games thus far.  This is a great start to the weekend, and it has put them in a strong position to win this series.

The Pirates and Dodgers will meet again tomorrow in the third game of the series.  Brandon Cumpton will make the start for Pittsburgh against Hyun-jin Ryu for L.A.  The game will be on FOX, airing at 7:15pm.