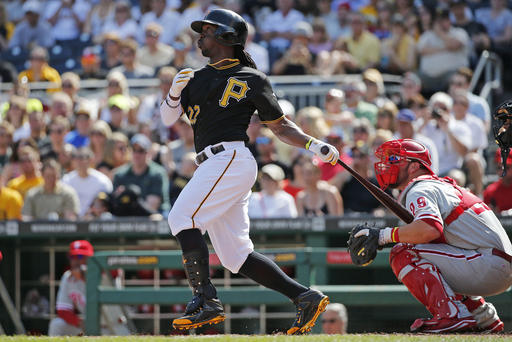 For the second time in as many days, the Pittsburgh Pirates pitching staff held the Philadelphia Phillies offense in check on their way to a victory.  While yesterday’s win featured an offensive outburst, the bats did just enough today to clinch another series for the Bucs.

Edinson Volquez pitched seven innings, while Andrew McCutchen had a two run homerun as the Pirates beat the Phillies, 3-2 at PNC Park.

This afternoon’s game featured five total runs and 11 hits for the two teams combined, and luckily for Pittsburgh, the timing of those hits were in favor of the home team.  Volquez gave up one run on four hits with four walks and five strikeouts through seven innings.  He got himself into trouble in the game, including a bases loaded jam in the third inning, but was able to work out of trouble, including a huge strikeout of former Pirate Marlon Byrd in the third.  Tony Watson pitched a perfect eighth inning, while Mark Melancon, although giving up a run, pitched the ninth and earned his 16th save of the season.

The Pirates took the lead in the first inning off Phillies starter David Buchanan.  McCutchen hammered a first pitch two run homerun to dead center field.  Gregory Polanco, who led off the game with a bloop single, also scored on Cutch’s HR.

Volquez helped his own cause in the second inning with an RBI ground out with the bases loaded, scoring Pedro Alvarez from third.

Cody Asche’s leadoff solo homerun got the Phillies on the board at 3-1.  Byrd homered off Melancon in the ninth to bring Philly to within a run, but the Buccos’ closer set the next three batters down in order to end the game.

Jordy Mercer also had a nice game at the plate, going 2-2 with two doubles and a walk.  Polanco, Cutch, Josh Harrison, and Alvarez had a hit each.

This was another big win for the Pirates, clinch yet another series victory.  They are playing very good baseball right now, while also taking advantage of a weaker part of their schedule.  They will get another chance at a series sweep when they face the Phillies tomorrow afternoon at PNC Park.  Former Pirate A.J. Burnett will start for Philly against Jeff Locke for Pittsburgh.  First pitch is scheduled for 7:05pm.