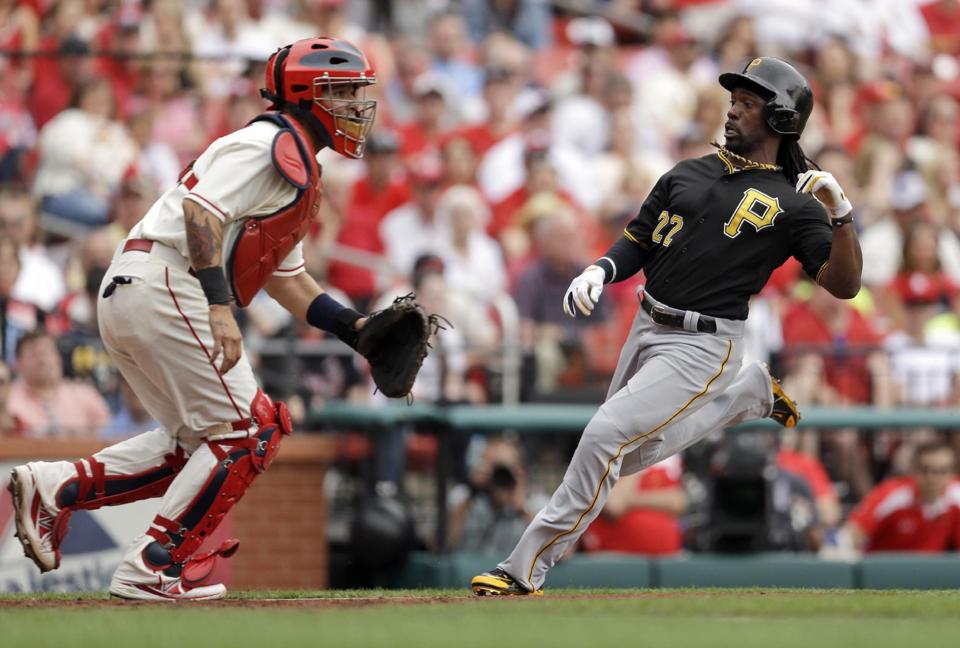 Great news!  The Pittsburgh Pirates scored a run today!  Pardon the sarcasm, but after the way this past week has gone, one can help but me critical of this team.  But not only did the Bucs score a run today, but they scored more runs than the St. Louis Cardinals, evening this weekend’s series at a game a piece with a 6-1 victory today at Busch Stadium.

The Bucs scored four runs in the fourth and two in the ninth to beat Tyler Lyons and the Cards this afternoon in front of a packed house in St. Louis.  Andrew McCutchen’s RBI single brought home Starling Marte, who led off the fourth inning with a walk.  Gaby Sanchez’s two run double scored McCutchen and Josh Harrison, who started at third base in place of Pedro Alvarez.  Later in the inning, Jose Tabata singled home Sanchez, putting the Bucs out in front, 4-0.

St. Louis had a golden opportunity to score in the third inning, but with bases loaded, Stolmy Pimentel struck out Yadier Molina to end the threat.  They did, however, get on the scoreboard in the fifth inning on an RBI double by Matt Holliday, closing the lead to 4-1 Buccos.

Pittsburgh put any chance of a comeback out of reach in the ninth inning.  Ike Davis led off with a walk and Tabata later singled.  Tony Sanchez, who made the start for Russell Martin today, singled home both Davis and Tabata, increasing the lead to 6-1, which would be the final.

Prior to the game today, the Pirates officially placed closer Jason Grilli as well as catcher Russell Martin on the 15-day DL.  Francisco Liriano, who made the start today, left in the third inning with flu like symptoms.  He is expected to make his next start.

This was a huge victory for the Pirates, not only because it snapped a horribly bleak streak for the team, but also because it’s a win against an N.L. Central opponent.  Further, the Cardinals will send their ace, Adam Wainwright, to the mound tomorrow afternoon to face Edinson Volquez and the Bucs.

Obviously, today’s win doesn’t erase all the worry that has come from the past couple weeks.  But it is a great start to hopefully get things turned around in the Steel City.  At this time yesterday, six runs by our offense would have seemed impossible.  Hopefully this is just what the Bucs needed to get the bats going.

The two teams will face off the rubber match of the series tomorrow afternoon at Busch Stadium.  First pitch is scheduled for 2:05pm.