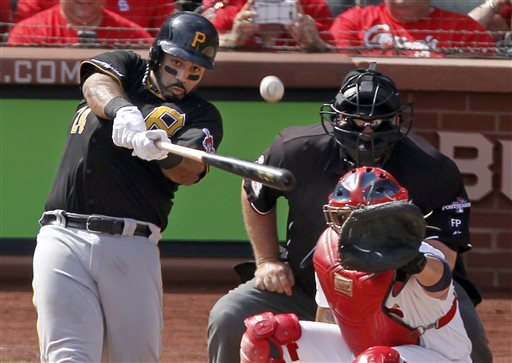 In the biggest game of his young career, Cole pitched phenomenally, giving up just one run on two hits and one walk with five strikeouts through his six innings of work.

The Pirates took the lead in the second inning off Lynn.  Pedro Alvarez got things started with a one-out double.  Later on in the frame, the Cardinals elected to intentionally walk Jordy Mercer to bring Cole to the plate with two outs.  Well clearly St. Louis hadn’t done their homework, as Cole smacked an RBI single, scoring Pedro and putting the Bucs out in front.

Yadier Molina, one of the leading candidates for the N.L. MVP award, hammered a solo homerun off Cole in the bottom of the 5th.  But as all good teams do, the Bucs responded with a run of their own in the seventh.  Byrd led off the inning, reaching first and advancing to second base on a throwing error by David Freese.  The Pirates manufactured the run home, as Martin poke a sac fly, putting the lead back at five runs.

Starling Marte added a solo homerun in the eighth just for good measure.  Tony Watson, Mark Melancon, and Jason Grilli shut things down in the latter innings, clinching the win for the Bucs.

This was a huge victory today for the Pirates.  It truly was a must-win game, and the Bucs came through as they’ve done all season.  The ability to bounce back from a 9-1 defeat a day ago and to do what they did today speaks volumes to what this team is made of and what they’re capable of doing this postseason.

With the victory, the Pirates are now tied at a game a piece with the Cardinals, as the two teams return home for a pair of games at PNC Park on Sunday and Monday.  If the Wild Card game against the Cincinnati Reds on Tuesday was an indication, it will be rocking once again on the North Shore this weekend.