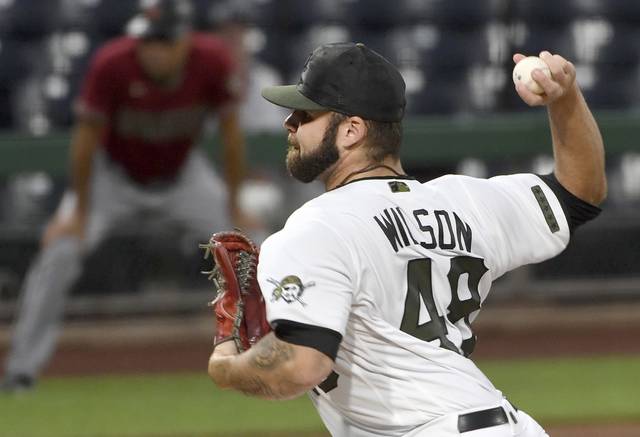 After three scoreless innings, Jacob Stallings plated the first Pirates run in the fourth on a sac fly to right to bring in Ke’Bryan Hayes.  In the fifth Michael Chavis hit a RBI single to left that drove home Gregory Polanco.  Both runs would be charged to Diamondbacks starter Tyler Gilbert, who worked five innings giving up three hits to go with three walks and four strikeouts.

Arizona would begin their comeback in the sixth.  Pavin Smith hit a solo home run for the first run of the inning.  The second run occurred because of a fielding error by Polanco.  That error allowed what would have been a single by David Peralta, to wind up having him on third.  The Diamondbacks took the lead for good in the seventh on a Carson Kelly solo homer.  They would add two more insurance runs in the eighth when Peralta drove in a pair on a double to left center.

Bryse Wilson started for Pittsburgh and gave up two hits, walked two, and struck out seven during his five innings of work.  Nick Mears collected one out in the sixth and gave up two runs, one earned, while allowing one hit and walking one.  Anthony Banda picked up his first loss after tossing 1.2 innings.  During that time he gave up one run on two hits with a strikeout.  The eighth inning belonged to Kyler Keller who was charged with two runs on two hits with a strikeout and a walk.  The fourth member of the Bucco bullpen to be used was Luis Oviedo and he would strikeout one batter in the ninth.

While Polanco may have committed a costly error, he was the only member of the Pirates to have more than one hit on the night.  With this series over, Pittsburgh will now welcome the St. Louis Cardinals to town for a four game series that begins on Thursday night.  St. Louis has been tough on the Pirates all season, so look for this to be a rough series.