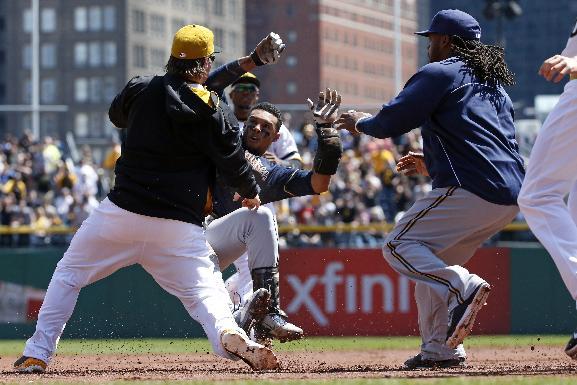 The starting pitching was great today for the Buccos, as Gerrit Cole pitched a solid eight innings today, giving up one run on six hits, while striking out six and walking one.  Cole had such a good day, that one had to wonder why manager Clint Hurdle would opt to lift him in the ninth for Jason Grilli, who had just collected a blown save last night.  With a 2-1 lead in the final frame Grilli came on and once again gave up a home run to Ryan Braun, this time to tie the game at two apiece.

Pittsburgh held the lead for awhile in this one, as they took a 1-0 lead in the fourth inning off a Neil Walker solo home run to right field that cleared the seats.  That score would remain until the eighth when Mark Reynolds tied the game with a jack to centerfield. The Pirates were able to answer in the bottom part of the inning when Jose Tabata hit an infield single to short that scored Ike Davis.

It was at this point that a win was in their grasp, but that was all gone with the Braun homer.  The offense could not muster any offense in five extra frames, and that allowed the Brewers to score the winning run in the fourteenth inning on their third solo homer of the day, this one off the bat of Khris Davis.

Even with the loss, there was some good old fashion Easter fun for the whole family in the top of the third.  Carlos Gomez drilled a triple to centerfield and instead of running the play out, he decided to pose at the plate and show up Cole, who let his feelings be known when Gomez reached third.  After some jawing back and forth, the benches emptied and some punches were thrown.  This would lead to Travis Snider and Gomez being ejected from the game.

I hate to say it, but this is starting to feel like pre 2013 when it comes to the Brew Crew.  We are not even out of April and they have a 6-1 record against the Pirates and appear to already be in our heads.  Grilli needs to be taken out of the closer role ASAP, because blown saves now can be the difference in the standings later in the year.  The offense also needs to step up because this pitching staff is not as lights out as it was a year ago.  The Buccos will welcome the Cincinnati Reds to town to begin a four game series tomorrow night.