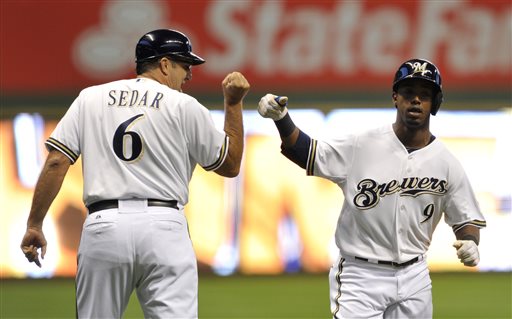 It seems, we ask this year after year…but what is it about the Milwaukee Brewers?!  Even though the Pittsburgh Pirates entered tonight’s game playing very well, they once again fell under the Miller Park curse, falling 10-4 to the Brewers in the first of three between the two divisional foes.

On paper, this looked like an enticing matchup between starting pitchers – Wandy Rodriguez for the Pirates and Yovani Gallardo for the Brewers.  Milwaukee’s starter held up his end of the bargain, holding the Bucs to two runs (one earned) on three hits in his seven innings of work.  Wandy, on the other hand, struggled with his control, giving up seven runs (six earned) on six hits through 3.2 innings.

Jonathan Sanchez relieved Wandy and didn’t do much better, giving up two runs on four hits in 2.1 innings, while Jared Hughes gave up a run and a pair of hits in the seventh frame.

The Pirates scored in the top of the first on an RBI ground out by Andrew McCutchen, scoring Starling Marte.  The Bucs led 1-0 heading to the bottom of the first…it would only go downhill from there.

After issuing a leadoff walk to Norichika Aoki, Rodriguez gave up a two-run homerun to Jean Segura, surrendering the lead to the Brewers before even recording an out.  After Yuniesky Betancourt’s ground out scored another run, Martin Maldonado smacked a two-run single.  When all was said and done, the Brewers led the Pirates, 5-1 after the first inning.

Gallardo and Aoki hit back to back solo homeruns in the fourth inning, and Carlos Gomez and Betancourt did the same in the fifth inning.  Betancourt added an RBI single in the seventh.

This was a game to forget for the Pirates.  As a team, they managed only five hits.  Their offense continued their struggles against Gallardo and the Brewers, including Pedro Alvarez, who was 0-4 on the night.  McCutchen went 1-4 with a single and an RBI, while Russell Martin, Gaby Sanchez, and Brandon Inge each added a hit, as did Garrett Jones, who belted a two-run homerun in the eighth inning.

The curse in Milwaukee continued for the Bucs tonight.  After a solid start to the season, Wandy Rodriguez has struggled recently, and tonight, he was shaky from the very beginning.  With a lineup like the Brewers have in a ballpark like Miller Park, that’s a recipe for disaster.

The Pirates will look to even the series tomorrow evening.  James McDonald will take the mound for Pittsburgh against Marco Estrada for Milwaukee.  First pitch is scheduled for 8:10pm.