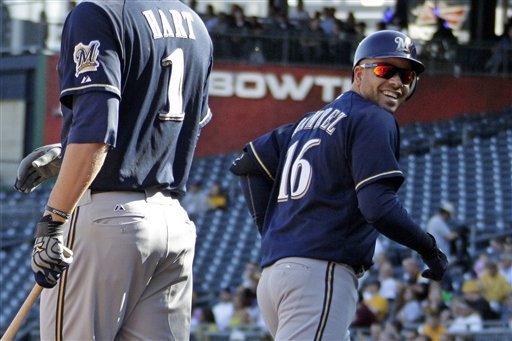 Today’s game between the Pirates and Brewers was another frustrating experience for the loyal fans hoping for a miracle.  After all, before the horrific past month and a half, the Pirates played the months of June and July like they were the best team in the league.  The past two games, the lack of offense was the main culprit in the Pirates demise.  This afternoon, the Pirates scored seven runs, six more than games one and two combined, and they still lost to the Brewers at PNC Park.

Wandy Rodriguez had been solid in his past handful of starts, and the Pirates (and their fans) were hoping he would continue his strong pitching in a game this afternoon that they desperately needed to win.  Unfortunately, the Brewers got to Wandy just as they get to most Bucs’ pitchers, tagging him for four runs on five hits through four innings.  The Buccos’ pitching staff limited the Brewers through the middle innings, but they got to Chad Qualls and Chris Resop in the eighth frame, scoring four more runs in the inning, which would prove to be the difference.

Offensively, the Pirates FINALLY showed up for the first time in way too long.  As a team, they totaled 13 hits, including three from Clint Barmes, and two from Starling Marte and Pedro Alvarez.  Andrew McCutchen had a huge three-run homerun in the fourth inning to get them back in the game after the Brewers had roughed up Rodriguez earlier.  Still, as the game went down the stretch, the Bucs had a chance to extend their lead, but couldn’t quite capitalize.

This was a very busy afternoon at PNC Park, full of runs, hits, and pitching changes that took well over four hours.  But at the end of the day, it’s quite simple…the Pirates lost a game that they desperately needed to win.  They have now fallen below the .500 mark for the first time since early June, and it’s literally astonishing to think that this team was once 16 games over .500 and were battling for the N.L. Central crown.

Following this horrible abbreviated home stand, the Pirates hit the road this weekend for a three game series against the Houston Astros.  At this point, it’s about the Bucs returning to playing decent baseball.  Forget about the Wild Card (please!); forget about .500.  The Pirates need to play well this weekend.  They’re a better team than the Astros, and they need to play like it, beginning tomorrow inHouston.