Pirates Fall To Brewers In Bizarre Game At Miller Park 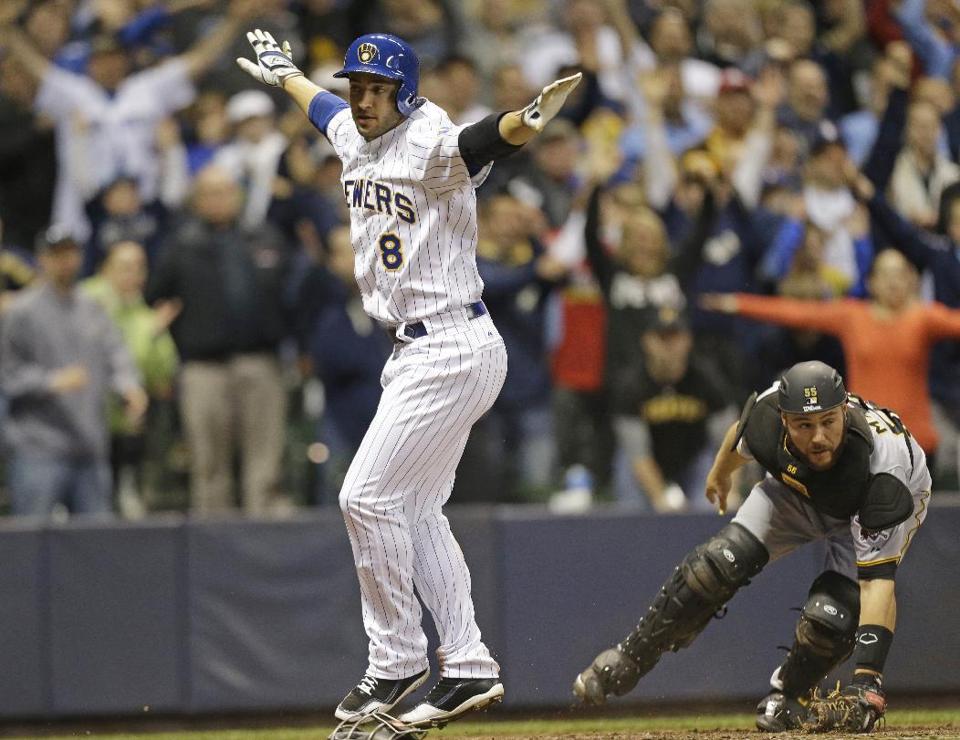 Edinson Volquez and Yovani Gallardo both pitched well for their respective teams, keeping the opposing offense in check throughout their starts tonight.  Volquez gave up two runs (one earned) on four hits with two walks and four strikeouts through his 6.1 innings of work, while Gallardo went six, giving up two runs on six hits with a walk and six strikeouts.  For Volquez, he continued his strong start to the 2014 season, lowering his ERA to just 1.29 and WHIP to 0.79.

The Brewers took the lead tonight on just the third pitch of the game.  Carlos Gomez belted a solo homerun to deep center field to put the Brew Crew in front early.  They added another run in the second inning as Khris Davis scored on a wild pitch.  At this point, it looked like it could be another ugly game for the Pirates.

The two offenses struggled for the rest of the game…that is, until the eighth inning.  Both teams had strong opportunities to score in this inning, but only one of the teams executed.

Marte got things started for the Bucs in the eighth with a one out single, and he advanced to third on a single by Snider.  But the next play is something that was baffling for us, as fans.  Andrew McCutchen hit a pop up behind home plate.  Jonathan Lucroy made the catch for the second out of the inning.  Snider made a dash for the second base, inducing the throw from Lucroy.  Marte attempted to sneak home but was gunned down at the plate to end the threat.

The Brewers, on the other hand, took advantage of their opportunity in the bottom half.  Ryan Braun smacked a one out single over Neil Walker’s head and Aramis Ramirez single over Mercer to put two runners on.  Lucroy’s RBI single to right scored Braun, giving the Brewers a 3-2 lead, which would be the final.

This was a heartbreaker for the Pirates.  They had a golden opportunity to score in the top of the eighth, squandered it, and gave up the winning run in the bottom of that very inning.  Mark Melancon took the loss for the Bucs.  Tonight’s game guaranteed the first series loss for Pittsburgh this season.

The Pirates will look to avoid the series sweep tomorrow afternoon.  First pitch is at 2:10pm.