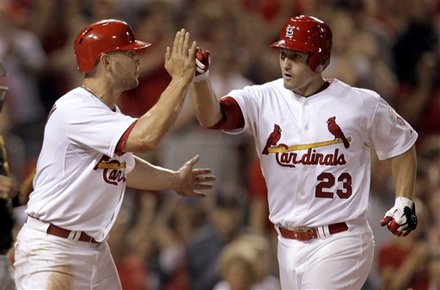 Turner Field is a difficult place to win for the opposition, and the Pirates held their own in a four-game series split against the Atlanta Braves, including an impressive 9-3 victory last night in what turned into a coming-out party for the Bucs’ offense.  For a team that has had a monumental amount of trouble on the road, this was a step in the right direction for the Pirates.

There’s no denying that the Bucs have always struggled at Busch Stadium, and tonight’s 10-7 loss continued that trend.  After a solid start to the game, Charlie Morton ran into some serious trouble in the fifth inning, and the St. Louis Cardinals put the game out of reach for the Pirates’ offense, which once again put alot of runs up on the board.

After giving up a run in the first inning, Morton settled in a bit, even squeezing his way out of a bases-loaded jam in the third inning and another tough spot in the fourth inning.  But as the phrase goes, if you keep playing with fire, you’ll eventually get burned…and that’s exactly what happened to Charlie in the fifth.

After a Matt Holliday 1-out single and a Carlos Beltran walk, David Freese crushed a three run homerun to deep right center.  Yadier Molina then doubled and scored on Allen Craig’s RBI single.  Morton was then chased from the game, relieved by Jared Hughes, who was just recalled today after Evan Meek was optioned to Triple-A Indianapolis.

This was by far Morton’s worst performance of the season thus far, giving up six runs (five earned) on eight hits in 4.1 innings.  Charlie’s ERA now sits at 4.22 for the season.  The bullpen, which has been solid all season, was torched throughout the latter part of the game.  Hughes surrendered three runs (two earned) on three hits, while Tony Watson gave up a run on two hits.

Offensively, the Pirates had some problems against St. Louis starter Adam Wainwright, other than a few bright moments.  Jose Tabata and Pedro Alvarez each hit a two-run homerun in the third and seventh innings respectively.  After a bad start to the season, both Tabata and Pedro are heating up in the past week or so.  Garrett Jones added a two-run single in the eighth inning, driving in Tabata and Andrew McCutchen.  Alvarez then smacked an RBI single, scoring Jones for his third RBI of the game.

Errors were aplenty for the Pirates tonight, which has been an ugly reoccurrence this season.  In order for teams like the Pirates to consistently beat teams like the Cardinals, they have to be fundamentally solid.  That was not the case tonight inSt. Louis.  Two elements that have been the team’s strengths this season, defense and pitching, were the weaknesses tonight.

The Bucs will look to even the series with the Cardinals tomorrow night as A.J. Burnett will be opposed by Lance Lynn on the hill.  First pitch at Busch Stadium is scheduled for 8:15pm.