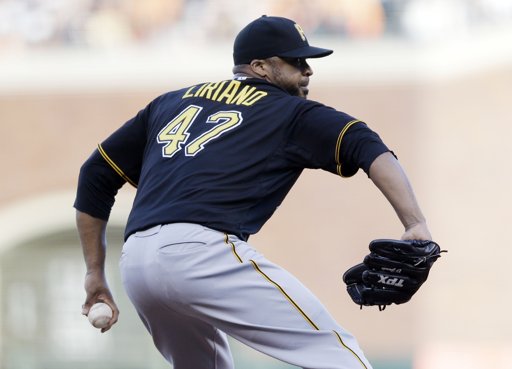 The Pittsburgh Pirates were down early tonight and could not muster a comeback, as they fell to the San Francisco Giants 6-3.  Francisco Liriano had a rough start and a disputed fair ball call down the right field line did not help either.

Liriano gave up four runs in the first inning and did not seem to be on top of his game from the beginning.  He lasted only four innings giving up nine hits while striking out three and walking two batters.  The disputed fair ball call came in the first and allowed there to be runners on second and third.  Those two runs would eventually come around to score.

The bullpen was unable to keep the Giants bats silent tonight.  Jared Hughes and Vin Mazzaro each allowed a run in a combined three innings of work.  Bryan Morris would pitch a scoreless eighth inning, while striking out two batters.

The offense made some noise tonight, but could not find that big hit to put them back into the game.  Tony Sanchez hit his first career homer to put the Buccos on the board in the fifth inning.  He would hit an RBI single in the sixth, along with Gaby Sanchez to make it a 5-3 game, but San Francisco got one of those runs back in the bottom part of the sixth.  Five of the pirates starting eight fielders went hitless tonight, that usually spells a rough night offensively.

This four game series will wrap up tomorrow afternoon with A.J. Burnett taking on former Bucco Ryan Vogelsong.  It would be a big for the Pirates to win this series and head back to Pittsburgh with a 5-2 record on this road trip.  First pitch is scheduled for 4:05pm.