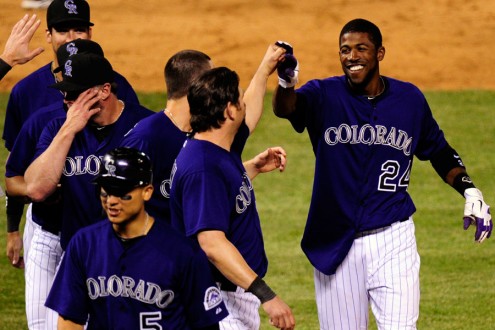 The Pirates entered tonight’s game against the Colorado Rockies in what seemed to be a potentially high scoring affair.  After all, the Bucs have had one of the most potent offenses in recent weeks, and with the hitter-friendly confines of Coors Field paired with the inflated ERA’s of the Rockies’ pitching staff, it seemed like a perfect recipe for a high-powered Pirates’ performance.

But despite some late-inning heroics to make things interesting, the Pirates fell to the Rockies tonight at Coors Field, 5-4.

For the most part, the Bucs couldn’t solve Colorado starter Jeff Francis.  The left-hander gave up one run on six hits through his five innings of work, before handing the ball over to Josh Roenicke, who was equally effective.

The Pirates did threaten in the final inning, as Andrew McCutchen and Neil Walker each singled off Rockies’ closer Rafael Betancourt to get the tying run to the plate in Pedro Alvarez.  Then, after a rather annoying rain delay, Alvarez hammered a 98 mph fastball from Rex Brothers into the left field bleachers to tie the game, 4-4.

After tying the game in the top half of the inning, the Pirates gave the game right back to Colorado, as Jason Grilli gave up the winning run.  Dexter Fowler’s sacrifice fly proved to be the difference as the Rockies won their 35th game of the season.

As for the Pirates’ performance on the mound, Jeff Karstens was solid in six of his seven innings of work.  The major hiccup came in the fifth inning, when a leadoff walk, a little bad luck, a couple mistakes led to his downfall.  The Bucs’ right-hander gave up four runs in the inning, highlighted by a two-run pinch hit double by Eric Young.  All in all, it was a strong outing by Karstens (7 IP, 6 H, 1 ER) tainted by one bad stretch in the middle of the game.

Offensively, Walker led the team with three hits, increasing his hitting streak to 16 games.  McCutchen had two hits of his own, bumping his Major League leading batting average to .372 for the season.  Alex Presley, Casey McGehee, and Clint Barmes added a hit each, while Pedro had the biggest hit of the night along with 3 RBI’s.

Following a disappointing weekend series inMilwaukee, the Pirates once again got off to a rough start in Colorado tonight.  With the loss this evening, the Bucs are just 1-3 on the current road trip, and need to play much better over the next couple days in order to keep pace with the rest of the division.

The Pirates remain one game behind the Cincinnati Reds in the N.L. Central, who lost to the Arizona Diamondbacks today.  Erik Bedard will take the mound for the Bucs tomorrow against the Rockies’ Christian Friedrich.  First pitch is slated for 8:40pm.