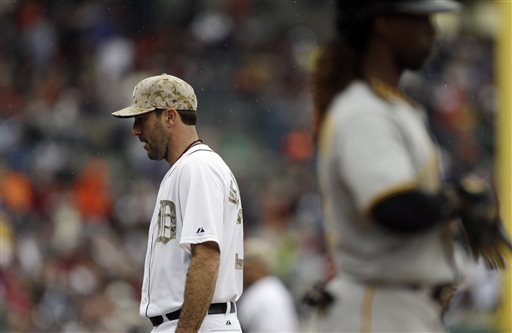 The Pittsburgh Pirates faced arguably the best pitcher in baseball, Justin Verlander, this afternoon, and while he had another stellar start, the Buccos had their chances to pull out the win.  The Detroit Tigers used a mix of their offense and a faulty Pittsburgh bullpen to win 6-5.

Verlander is used to putting on a clinic when he faces the Pirates and even though his final line had some blemishes, he still had some pretty good stuff.  He lasted seven innings, allowing three runs on seven hits, while striking out thirteen and walking two.

The Buccos even jumped on him early as Andrew McCutchen brought home Neil Walker in the first inning on a sacrifice fly.  Verlander was lights out in innings two through six, but faced some adversity in the seventh.  That is when Travis Snider would hit an RBI triple and then immediately score on a Walker double.

Pittsburgh starter Francisco Liriano needed to be near perfect today, considering who his mound opponent was and the quality of the Detroit offence.  Today would mark the first rough outing he has had since being in a Pirates uniform.  He lasted only five innings, giving up four runs on eight hits, and striking out three with two walks.

The Buccos were only a run down going into the bottom of the seventh.  That is when Jose Contreras would walk four batters, allow two runs, and give up one hit, all while only earning one out.  Now down three runs Pittsburgh fought back once again as Garrett Jones was able to score on a fielding error by Prince Fielder and then Russell Martin scored on a double by Gaby Sanchez.

Josh Harrison would be picked off second, as he was pinch running for Sanchez, for the second out of the inning and Brandon Inge  would strike out to end the eighth.  Pittsburgh then had Andrew McCutchen up to bat with a runner on first and two outs, but he would chase strike three to end the game.

The Pirates fought hard, and while they came up short I think they saw what it takes to beat a quality team like the Tigers.  Plus, in four game series this year, the Buccos have dropped game one all four times and came back to win the next three games.  Tomorrow night we will see Jeanmar Gomez take on Rick Porcello with first pitch scheduled for 7:05pm.