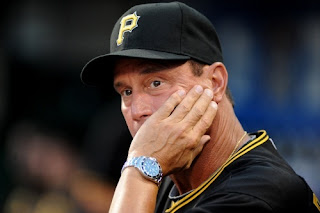 Less than 24 hours after they ended one of their worst seasons (record-wise) in recent memory, the Pirates fired manager John Russell. Good ol’ JR coached our Buccos for 3 seasons, but unfortunately, it resulted in 299 losses, including a horrific 105 this season alone. In fact, only the 1952 Pirates, who went 42-112, lost more games in baseball’s modern era than Russell’s final team, which was the NL’s worst in batting, pitching and defense. While Russell was fired, general manager Neal Huntington was retained by the Pirates.

The Pirates also announced that the search to find Russell’s replacement will begin immediately. While it’s difficult to blame Russell for the state of the franchise and the fact that he was introduced as the team’s manager three years ago when the team was in shambles. He took the job and immediately faced incredible odds. That being said, his inability to motivate his team away from PNC Park, along with the horrific starting pitching, proved to be his fate. He became an unpopular element of baseball in Pittsburgh as his tenure continued due to his stoic demeanor, reluctance to argue most calls and peculiar strategy.

The Pirates now will begin the search for a captain to run the ship of highly-talented young players, most notably Jose Tabata, Pedro Alvarez, Neil Walker, and Andrew McCutchen. Keep it tuned in right here to Fans From The Stands for all of the latest Pirates’ news.