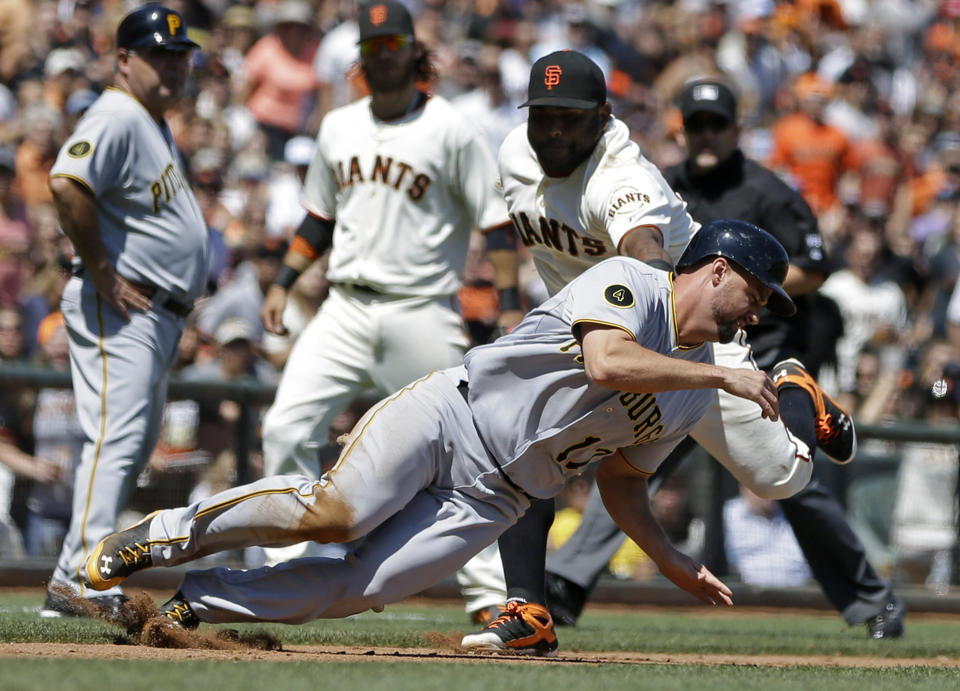 This afternoon’s game between the Pittsburgh Pirates and San Francisco Giants at AT&T Park was there for the taking, but unfortunately, the Bucs gave it away to the home team, losing out on a chance to sweep, falling two games behind in the N.L. Central division.

Baserunning blunders and missed opportunities cost the Pirates today, losing 7-5 to the Giants in San Francisco. Coupled with a Milwaukee Brewers victory, the Bucs fell to two games back in the N.L. Central.

Today’s game was vastly different from the previous two, in which the Pirates’ pitchers held the Giants in check throughout. In the first two games of the series, the two teams combined to score a total of nine runs. This afternoon, they combined for twelve runs, but the Pirates left plenty of runs on the bases.

Charlie Morton was not sharp at all this afternoon, giving up four runs on nine hits with three walks in just five innings of work. His mound opponent, Tim Lincecum, was even worse, lasting just 3.1 innings while surrendering five runs on five hits with three walks. The bullpens were busy today, as the two teams combined to use nine relievers.

The Giants scored three runs off Morton in the first inning. Michael Morse singled home Brandon Crawford, and a bases loaded walk to Joe Panik scored the game’s second run. Gregor Blanco’s RBI single scored Pablo Sandoval, and it looked as though the Giants were going to run away with this one early.

As they’ve done all season, the Pirates battled back to make a game out of it. Neil Walker doubled in the second inning and eventually scored on Travis Snider’s ground out. Josh Harrison hammered a two run homerun, his fourth straight game with a round-tripper, in the third inning to tie the game.

After the Giants scored a run in the bottom of the third, Jordy Mercer gave the Pirates the lead with a two run homerun in the top of the fourth. They had a great opportunity to increase their lead in the sixth inning, but one of the most bizarre plays this baseball fan has seen ended the threat.

Chris Stewart came to the plate with one out and Snider at second and Gaby Sanchez at third. Stewart drew a walk to load the bases with Pedro Alvarez coming to the plate. But Snider, apparently thinking the bases were already loaded, began jogging toward third base. He was quickly picked off and tagged out. Meanwhile, in another bone-headed move, Sanchez broke for home…needless to say, he was quickly tagged out as well, ending the threat and keeping it just a one-run game.

The Giants scored two in the seventh and one in the eighth, and the Pirates bats went down quietly in the final innings, as the home team avoided the series sweep.

What a horrible game this was to lose. The Pirates put themselves in a great position to sweep a very good baseball team, but blunders and lack of focus cost them today. Morton was not good at all today, and the bullpen surrendered late inning runs. Overall, this was a game to forget….except for Harrison and Mercer, who had very productive games at the plate and in the field.

The Pirates continued their west coast trip as their kick off a four game series tomorrow against the Arizona Diamondbacks.