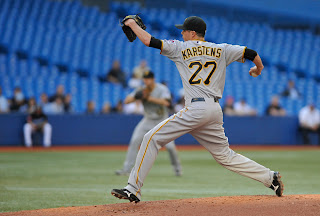 Jeff Karstens has come a long way for the Pittsburgh Pirates since the team left Bradenton, Florida.  Originally looked at to come out of the bullpen for long relief situations and as the occasional spot start, Karstens has become quite possibly the Buccos most consistent starter.  He was at it again tonight as he would out duel Brett Cecil of the Toronto Blue Jays for a 6-2 victory.

Karstens would log seven innings of work tonight, as he would allow two runs on five hits with one walk and two strike outs.  The only two runs he would give up on the night were solo home runs in the fifth inning by J.P. Arencibia and Yunel Escobar.
The Pittsburgh offense had no trouble with Cecil tonight as he would be tagged with six runs on eight hits through 6.1 innings pitched.  The Pirates got to him in the first inning.  Alex Presley would triple and then be brought home on an Andrew McCutchen ground out to third.  The fifth inning saw the Buccos score again after a Josh Harrison double, he would be moved up on a sacrifice bunt by Michael McKenry and then score on a Presley sacrifice fly.
After Toronto tied the game, Pittsburgh broke it open with a three run sixth.  Lyle Overbay would reach third after the Blue Jays short stop, third baseman, and left fielder misplayed a fly ball.  This would allow Ronny Cedeno to bring Overbay home on a double.  Brandon Wood stepped to the plate and smacked a two run homer to left field to give the Pirates a 5-2 lead.  Pittsburgh added one more run for insurance in the seventh, before handing the game over to the bullpen who shut the door on another Pittsburgh victory.
This was a complete victory for our Buccos.  All aspects of the game contributed to the win.  These are the types of games that show what the Pirates are capable of when all cylinders are firing.  Now Pittsburgh is off to our nation’s capital for a four game series with the Washington Nationals on Friday.  First pitch is scheduled for 7:05.
Record vs. Blue Jays:  2-1
Record vs. A.L. East:  6-3
Interleague Play Record:  8-7
Record on the Road:  22-19
Overall Record:  41-39
And…
As Always…
Let’s Go Bucs!!!!!