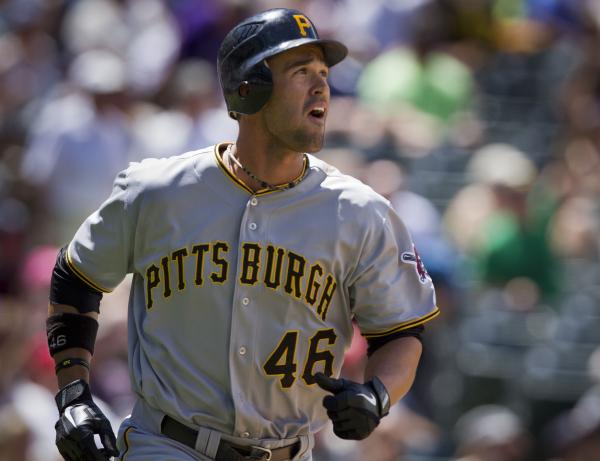 For the past month and a half, the Pirates have had one of the most potent offenses in all of baseball, led by Andrew McCutchen and Neil Walker.  While Cutch is putting up MVP like numbers on a nightly basis, Walker has been steadily climbing (and recently surpassing) the .300 batting average mark for the season while also building up a 17 game hitting streak.

Today, McCutchen and Walker failed to tally a hit between them, yet the Pirates still beat the Colorado Rockies in a crazy one this afternoon, 9-6, at Coors Field.

Despite having James McDonald on the mound today, one of their most consistent pitchers from this season, the Pirates fell behind early.  J-Mac gave up five runs in the first two innings, and was on the ropes throughout his start this afternoon.  He gave up homeruns to Dexter Fowler and Carlos Gonzalez early, and after struggling with his control and the ability to close out batters, he and the Bucs found themselves down 5-1 after two innings.

Overall, McDonald did enough to earn his 10th win of the season, along with a lot of help from his offense.  He gave up a total of six runs on nine hits through five innings, while walking four and striking out only two batters.  The bullpen was solid today, tossing four scoreless innings.  Brad Lincoln threw a pair of innings, while Jason Grilli and Tony Watson combined to get the Bucs out of a tough spot in the eighth.  Joel Hanrahan earned his 26th save of the season with a one-two-three ninth inning.

For the first time in a long time, McCutchen and Walker struggled at the plate, but the rest of the offense picked them up.  Garrett Jones led all hitter with three hits, including a three-run homerun in the third inning, while Pedro Alvarez added a homerun to start the scoring in the second.  Casey McGehee hammered a go-ahead two run homerun in the fifth inning, and later in the same frame, Rod Barajas connected for a solo shot.

The Offense totaled nine runs on eleven hits, and in a weird twist from what has become expected from this team, McCutchen and Walker were the only two starters to not tally a hit today.  Clint Barmes also added a huge two-run single as well.

The Pirates concluded this six-game road trip with a 3-3 mark.  While the team certainly hasn’t played as well since the All Star break, they’ve continued to find ways to win games in the past few days.  After a tough series loss last weekend inMilwaukee, the Pirates did what they’ve done all season long:  they responded to adversity by putting together a winning stretch of games.

After this series victory over theRockies, the Pirates are now back to eleven games over .500, and are keeping pace with the Cincinnati Reds. They have a day off tomorrow before opening up a home stand this weekend against the Miami Marlins.