Pirates Hold Off Cubs For 2-1 Victory 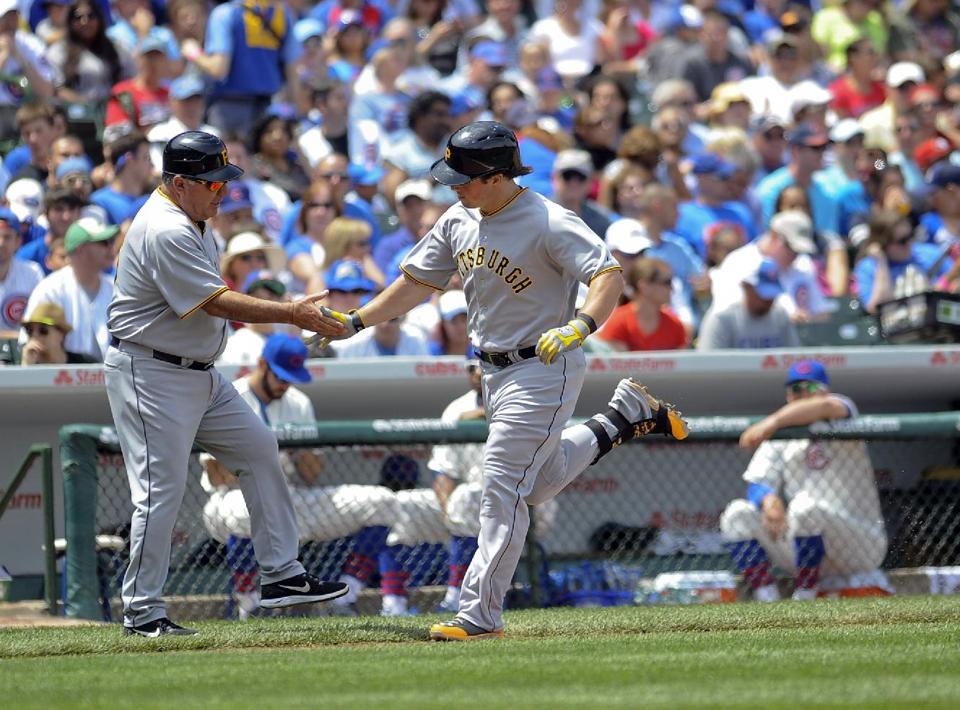 More than anything else, the biggest difference between 2013 and this season for the Pittsburgh Pirates has been the starting pitching.  Last year, it was one of the best in the league, and this year, well, that just hasn’t been the case.  Accordingly, the Bucs entered this afternoon’s rubber match against the Chicago Cubs with a 37-39 record, 8.5 games out of first place.

But today, we saw a little of what we grew so accustomed to a year ago:  the starting pitching was solid, we got just enough offense from our bats, and the bullpen held on for a tough, low-scoring victory.  Brandon Cumpton pitched seven scoreless innings and Travis Snider hit his fifth homerun of the season, as the Pirates withstood a late Cubs rally to take the game, and the series, 2-1.

Cumpton was solid today, giving up just two hits and two walks while striking out four in seven innings of work.  Tony Watson tallied his 19th hold of the season by pitching a scoreless eighth, and Mark Melancon earned his 12th save of the season.

The Pirates’ offense didn’t do much today, tallying just six hits, but they did enough in the third inning, which would carry them to victory.  Snider blasted a homerun to deep center field to lead off the inning.  Chris Stewart then walked, advanced to second and third on a bunt sacrifice by Cumpton and a ground out by Gregory Polanco.  Josh Harrison continued his strong season with an RBI single, a line shot off Cubs’ starter Jason Hammel, going for an infield hit and allowed Stewart to score from third.  The run turned out to be the game winner.

The Cubs certainly didn’t go quietly this afternoon, spoiling two golden opportunities to score runs in the eighth and ninth innings.  Junior Lake led off the eighth with a bunt single off Watson, and Darwin Barney singled to put runners on first and second with no outs.  After a pinch hit bunt sacrifice by Travis Wood to put runners on second and third with one out, Watson struck out Welington Castillo and Justin Ruggiano to end the threat.

Similarly, the Bucs gave the Cubs more life in the ninth inning.  Anthony Rizzo led off with a single, and advanced to third on Starlin Castro’s base hit, putting runners at the corners with no outs.  Luis Valbuena struck out, and Nate Schierholtz grounded into a fielder’s choice, allowing Rizzo to score and cutting the lead in half.  But with two outs and a runner on first, Melancon got Lake to fly out to end the game.

This was a big series for the Pirates to win, especially having dropped the first game on Friday.  Games like today are big ones to win, because of the poor offensive production being overshadowed by a strong pitching performance.  If the Pirates are going to climb back in the playoff race, they will need more games like this from their pitching staff.

Polanco went hitless for the first time in his Major League career, going 0-3 with a walk, lowering his average to .345 for the season.  Andrew McCutchen went 1-4, Ike Davis and Snider had two hits each, while Pedro Alvarez continued to struggle with an 0-4 performance, including two strikeouts.

The Bucs continue their road trip tomorrow with a three game series against the Tampa Bay Rays.  First pitch tomorrow is scheduled for 7:10pm.