Pirates Hold On To Early Lead, Take Down Braves 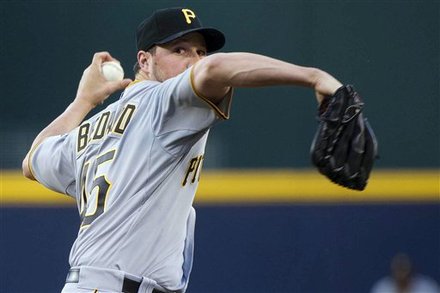 Finally Erik Bedard received the little bit of run support he needed to earn his first win in a Pittsburgh Pirates uniform, and it came against the Atlanta Braves.  Bedard did not have his best stuff tonight, but he was effective and that’s all the Pirates should need out of their pitching staff.  He would go five innings allowing one run on five hits while walking two and striking out nine.

Four pitchers came out of the bullpen to hold down the lead tonight, and it was really a tale of two halves.  The first two were Chris Resop and Juan Cruz.  These two pitchers had us Bucco fans on the edge of our seats for all three outs.  Deep pitch counts, hits, and runners in scoring position had us thinking here we go again.  Fortunately, they were able to work themselves out of jams.  As for Jason Grilli and Joel Hanrahan it was business as usual.  Neither pitcher allowed a hit, with Grilli striking out the side and The Hammer setting down two.  The final out came on a jumping catch at the right field wall by Jose Tabata to rob Eric Hinske.

The offense struck early, which for a team that has been struggling is very important.  With runners on second and third, Garrett Jones would hit a sacrifice fly to make it 1-0.  The second inning saw Alex Presley double home Rod Barajas.  This was followed by Tabata bringing Presley home on a RBI single.  Pedro Alvarez would collect an RBI in the fifth as the Buccos went on to win 4-2.  Alvarez went 2-4 tonight hitting two doubles.  Neil Walker also collected two hits tonight in the win.

Pittsburgh needed this win tonight after a rough loss on Friday.  With two games left against the Braves in Atlanta it would be good to at least split.  Kevin Correia will look to continue his road success tomorrow.  His mound opponent will be Tim Hudson, who is making his first start of the season.  First pitch tomorrow is at 1:35.