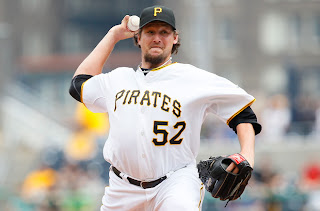 It’s January. The NFL playoffs are down to the final four, while the NBA, NHL, and college basketball are in full swing. It’s easy to forget about Major League Baseball at this point. The Winter Meetings have been over for weeks, and the free agent market has been relatively low-key recently.

All that considered, there’s always Pirates’ news we can talk about! After all, we’re two and half months away from Opening Day 2012, and the Bucs’ roster and rotation appear to be nearly in place, to the delight or dismay of fans here in Pittsburgh.

The Bucs have made a few deals leading up to the arbitration deadline. When this offseason began, the team had nine arbitration-eligible players. They non-tendered Ross Ohlendorf (thank you!) and traded Jose Veras to the Milwaukee Brewers for Casey McGehee, who is also arbitration eligible.

Pittsburgh inked a deal with Chris Resop for 1-year, $850K for 2012, while also agreeing to terms with Jason Grilli for 1 year, $1.1M. These deals were done in the previous weeks, but up until yesterday, some of the biggest names in the Pirates’ arbitration pool were still without deals.

That, of course, changed on Monday, as the team agreed to terms with both Joel Hanrahan and Charlie Morton. Hanrahan will earn $4.1M this year with up to $500K in performance bonuses, while Morton, who may or may not be available when the season starts due to offseason hip surgery, will earn $2.445M in 2012.

Just moments ago, news broke that the Bucs have agreed to a deal with Jeff Karstens, who was also arbitration-eligible. Karstens’ deal is worth a reported $3.1M for the 2012 season.
The remaining arbitration-eligible players are Garrett Jones and Evan Meek, as well as newly acquired Casey McGehee. Certainly, all of these are expected to be a part of the 2012 Pirates’ roster, so these deals will work themselves out over time.

That leads us to the question, though, are the Pirates done making moves this offseason? After the flurry of moves across Major League Baseball throughout the Winter Meetings, things have been utterly calm here in Pittsburgh, and with the lack of rumors we’re hearing regarding any free agent signings or trades/deals, it seems apparent that Pirates’ management is pleased with where the roster stands right now. Should they be?

There have been a scattering of names that have been of some degree of interest to the Pirates throughout this offseason, all of which have essentially dwindled down to two players that seem like possibilities at best: Derrek Lee and Jeff Francis. Lee seems more probable at this point, simply because the Bucs appear to have their starting rotation in place, especially considering the signing of Erik Bedard during the Winter Meetings. Lee, on the other hand, is still on the market, most likely waiting for Prince Fielder to make his move and get his money, so Lee can follow suit and do the same. We can’t be sure what the interest level is for Lee at this point, but based on his performance with the Pirates at the end of last season, there’s clearly still some pop left in his bat.

For those who have been unhappy (once again) with the team’s offseason acquisitions, you’re not alone. The fact that other teams are agreeing to terms with dominant starting pitchers and 100 RBI hitters, while the Bucs are talking platoon outfielders and serviceable infielders can be a bit frustrating. But if we open our eyes to reality, there’s no way the Pirates can acquire those types of players with where the organization is at this point. The argument against this statement is that teams have to spend money to win in Major League Baseball, which is a valid point. But here’s the argument against that: It’s all a matter of perspective. Look at the situation from the players’ point of view. What are the two primary factors a player favors more than anything? Money and winning. They all want the big bucks and they all want to win. Can the Pirates offer either one of these at this point? Again, look at it from the players’ point of view. Why head to Pittsburgh and take less money when you can earn more money with a better team? It just doesn’t make sense for them, and that’s why it’s not realistic for us, the fans, to expect the Pirates to make a run at these players. I’m not saying I agree with this, I’m simply looking at the situation from a realistic point of view.

Clearly, the Pirates are heavily relying on the continued improvements of Andrew McCutchen, Neil Walker, and Jose Tabata, as they should, to a certain point. Management has further expressed their confidence in Pedro Alvarez to put 2011 behind him and perform at the level his pedigree suggests he can and eventually will in the future. The signings of Clint Barmes and Rod Barajas are fine, minimal upgrades, but the key to the success of this team will be based on the improvements of the aforementioned young talent dawning the Pirates’ jerseys.

Pitchers and catchers report to Spring Training on February 18, just 32 days from today, and between now and then, as well as the weeks afterward leading up to the start of the season, we’ll learn the starting lineup and rotation, as well as the role and utility players that could make an impact. For now, let’s relish in the anticipation of another Pirates’ season. Just a month away from Spring Training! Get ready!