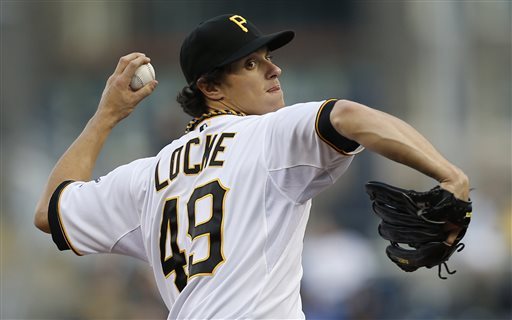 The Pittsburgh Pirates had a tough test in front of them on Saturday night when they took the field against their division rival, the Cincinnati Reds.  Cincinnati is an early season favorite to win the division and their pitcher, Johnny Cueto has had many good outings against the Bucco bats.  In order for Pittsburgh to win tonight, they would need timely hits and a quality outing from Jeff Locke.

Check out the pregame show from just before tonight’s game:

While Locke was able to stay out of trouble as far as runs, he did get himself into a couple of jams with walks and hits.  Fortunately he was able to induce groundballs on his way to his first win of the year.  His final stat line on the night was five innings pitched, allowing one run on four hits while walking four batters.  The lone Reds run came in the third when Zach Cozart hit a home run to left field.

The Pirates were unable to have a big inning, but a few small innings were enough tonight.  Garrett Jones would double home Andrew McCutchen in the fourth.  The next time the Buccos came to bat Starling Marte would single in Travis Snider for what would end up being the game winning run.  They would add an insurance run in the seventh off the bat of Jose Tabata when he doubled in Pedro Alvarez.

Pittsburgh turned the game over to their bullpen in the sixth, and they did not miss a beat.  Justin Wilson would pitch the 1.2 innings and had some trouble allowing three hits and two walks.  He would get bailed out when Jared Hughes recorded the final out of the seventh.  After that it was the new 1-2 combo of Mark Melancon in the eighth and Jason Grilli in the ninth to pick of his fifth save of the year.

The FFTS guys gave their reactions to the Pirates’ win.  Check out the postgame show below:

This was the Pirates second straight series win and they have the opportunity to send the Reds out of town without a win on the weekend.  With Wandy Rodriguez out tomorrow Phil Irwin will get the spot start for the Buccos, while the Red Legs will counter with Mat Latos.