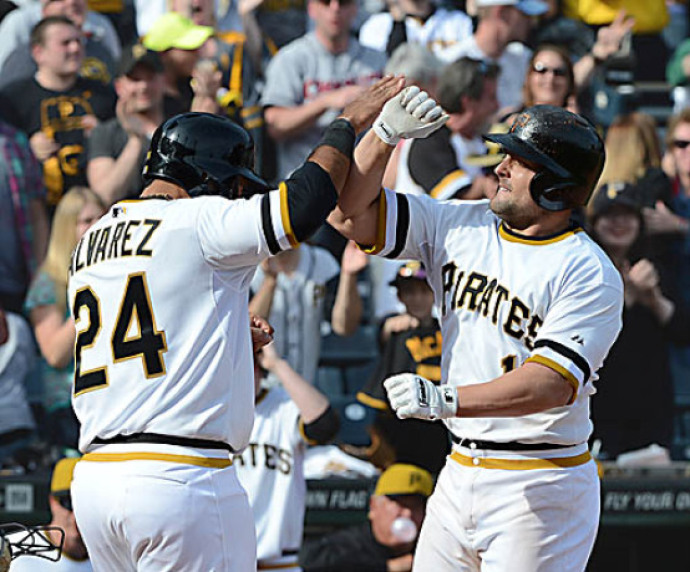 After a difficult first road trip of the 2013 season, the Pirates returned home this weekend for one of the more difficult home stands of the year.  It’s off to a really good start.  The Pirates rallied for ten runs in their final two innings, stunning the Cincinnati Reds, and the crowd, to complete a three-game weekend sweep at PNC Park.

Check out our predictions for this afternoon’s game in the pregame show:

Michael McKenry hit two homeruns and knocked in three RBI’s, Starling Marte hit the game-winning long ball, and the Pirates overcame a five run deficit to sweep the team that most experts picked to win the N.L. Central.

Cincinnati got off to a fast start against Phil Irwin, who was called up to make a spot start in place of the injured Wandy Rodriguez.  Brandon Phillips had a two-run single in the first and an RBI single in the fifth to lead the Reds to a 5-0 lead, heading to the bottom of the seventh.  As for Irwin, he struggled in his debut, giving up five runs (four earned) on six hits with four walks in his 4.2 innings of work.

The Bucs’ comeback started in the seventh inning with a solo homerun off the bat of McKenry to get them on the board.  After Marte reached base, Travis Snider blasted a rocket off the Clemente wall in right field, within inches of a homerun.  After an extensive review, it was ruled crowd interference and Snider was awarded an RBI double.  Andrew McCutchen doubled home Snider, and Gaby Sanchez hit a pinch-hit single to score Cutch.  The Pirates climbed to within 5-4 heading into the eighth inning.

Cincinnati responded in the eighth (like most good teams do) with a run of their own.  Jack Hannihan had a pinch hit RBI single to stretch the Reds’ lead to 6-4…but that wouldn’t last for long.

As exciting and impressive as the Pirates’ offense was in the seventh inning, it was even better in the eighth.  After Pedro Alvarez drew a walk, McKenry hammered his second homerun of the game to tie the game, 6-6.  Marte crushed a two-run homerun later in the inning, scoring Jose Tabata to give the Bucs an 8-6 advantage.  Sanchez added a sacrifice fly and Neil Walker smacked an RBI single off Aroldis Chapman to stretch the lead to 10-6.

Mark Melancon gave Jason Grilli a break this afternoon, closing things out in the ninth.  Despite giving up a leadoff solo homerun to Joey Votto, the Pirates secured their third consecutive win and their fifth in their last six games.

This was a huge victory for the Pirates against, not only a divisional opponent, but the one team that is the favorite to be there at the end.  The offense has come alive as of late, and has been picked some of the pitching slack.  It’s what good teams do, and that’s what the Pirates have been doing as of late.

Check out our post-game reactions to all that transpired this afternoon on the post-game show:

It won’t get any easier for the Pirates (6-6), as they will continue this difficult home stand tomorrow night, welcoming the St. Louis Cardinals in for a three game series.  First pitch is slated for 7:05pm.