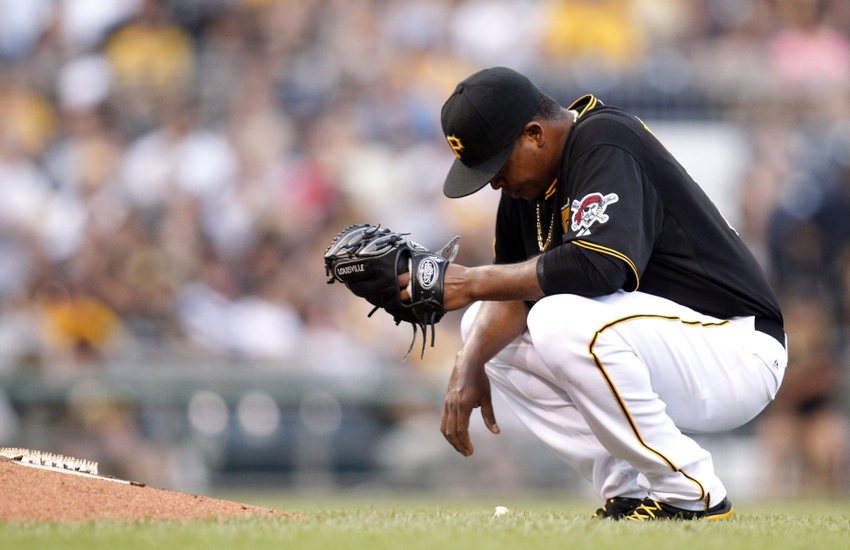 After all of the drama of the trade deadline, I felt it was necessary to respond to yesterday’s events.  The Pittsburgh Pirates didn’t do anything at the deadline.  Despite all the murmurs and rumours throughout the week, when all was said and done yesterday at 4:00pm, the Bucs roster looked the same as it did last week.

Obviously, a large number of people in Pittsburgh are disgusted with the Pirates’ lack of activity.  We have heard that the Pirates inquired about quite a few players on the market, and were even close to a few deals, but, as Neal Huntington explained, they felt that the right move was no move.  A lot of Pirates fans disagree.  With the highly competitive N.L. Central within the Bucs’ grasp, many think that this is a small window of opportunity for this team to compete for the division crown and beyond, and a marquee player could be enough to push them over the edge.

I’m torn on my reactions to yesterday’s activities (or lack thereof from the Pirates).  Would it have been nice to acquire a Jon Lester or a David Price?  Of course.  But at what cost?  Based on the moves yesterday, the Boston Red Sox were asking A LOT in return for their players.  They sent Lester and Jonny Gomes to the Oakland Athletics for Yoenis Cespedes.  They sent John Lackey and Corey Littrell to the St. Louis Cardinals for Joe Kelly and Allen Craig.  Several reports suggest that the Red Sox wanted Gregory Polanco in any deal with the Pirates, for Lackey or Lester.  This would be a terrible move for the Pirates, and I’m glad they didn’t make that deal.

The David Price situation is one that is tougher to swallow.  While Lester and Lackey were dealt with high returns, the same doesn’t appear to be true for Price.  The move was made in a three team deal, which featured the Tampa Bay Rays, Seattle Mariners and Detroit Tigers.  Price is now a Tiger, while Austin Jackson moves to Seattle and Drew Smyly, Nick Franklin, and Willy Adames move to Tampa.  Price made it known that he wanted to move to a “proven winner,” and that is certainly the case in Detroit.

Again, it’s not the fact that the Pirates didn’t get Lester, Lackey, Price, or any high priced player.  You don’t want them to get someone just to get someone.  My concern, though, is that the Cardinals and Milwaukee Brewers, who they Bucs are directly competing with for the division, made moves to upgrade their roster, and the Pirates didn’t.  Milwaukee acquired Gerardo Parra, while the Cards nabbed Lackey and Justin Masterson.  Huntington said yesterday that he was confident in the group he has on the field and that there are a number of minor leaguers who they feel are ready to contribute at the Major League level soon.  That’s great, but the Pirates need to win now…while the core of their group is still together.

Andrew McCutchen is one of the best players in baseball, and he will be for the next several years, leading up to the point where he will most likely be leaving Pittsburgh.  Will the Bucs be willing able to resign Neil Walker?  What about Russell Martin?  What on earth will happen with Pedro Alvarez?  Yes, the Bucs have an incredibly talented outfield with Cutch, Polanco, and Starling Marte, and while the starting pitching rotation looks promising with some of the most highly regarded prospects coming up through the ranks, but nothing is a sure thing in baseball.  You need to win when you have opportunities, and right now, the Pirates have an opportunity to not only win the division, but put themselves in contention to make a run in the National League playoffs.

The Pirates have some very talented pieces, and, on some nights, it looks as though they could play and win against any team in baseball, A.L. or N.L., but then there are games like the past two against the San Francisco Giants and Arizona Diamondbacks.  To win at the Major League level, you need to be consistent.  That’s what separates the good teams from the great teams.  Right now, from the starting pitching to the bullpen to the offense, this team is not consistent.  They need to upgrade.

Now, as we all know, the trade deadline doesn’t mean that no moves will be made after yesterday.  After all, the Bucs acquired Justin Morneau and Marlon Byrd in August last year, two players who helped them tremendously down the stretch.  So there is always the possibility that they will make a move here in the next few weeks.

Will the Pirates be able to compete with the Brewers and Cardinals down the stretch with their current lineup?  Yes, I believe so.  But will they be able to win the division over these two teams?  With the way the teams matchup, I have a hard time believing that the Bucs will be able to beat either of these teams in a series down the stretch.  And even if they do, can they match up with a team like the Los Angeles Dodgers in a five or seven game series?  It doesn’t look promising.

The Pirates have a good team, and they will continue to put pressure on other teams in the division and in the league from now until the end of the season.  But is that good enough?  It’s not for the fans…that has become obvious with the harsh reaction from yesterday and today.

Let’s just worry about the Pirates taking these three games from the Diamondbacks and wrap up this road trip on a winning note.  That will satisfy the Bucco faithful…for now.