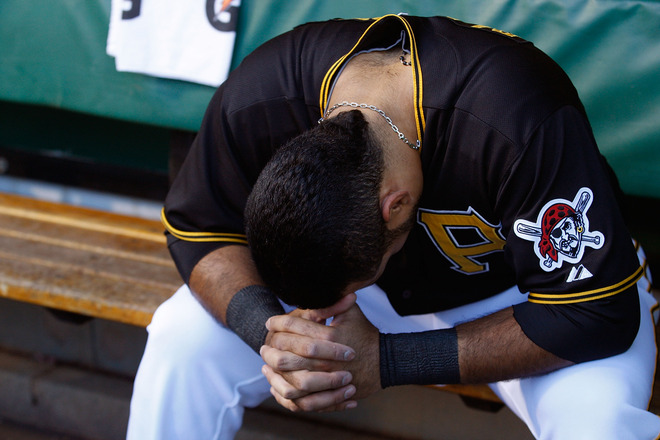 As a true Pittsburgh Pirates fan, I often wonder why some people can always be so down on the Buccos.  After watching tonight’s game I see why those people are so negative.  No matter what we hear about up and coming prospects or players that were brought in during the offseason, the bottom line is they still appear to be the same old Pirates.

The Houston Astros scored the only run they would need tonight in the second inning.  Justin Maxwell would come home when Brian Bogusevic grounded into a double play.  Yep that was the only run James McDonald would give up tonight.  He pitched one of the best games he ever has in a Pittsburgh uniform going eight innings allowing four hits, walking two batters and striking out eight.  Jared Hughes finished up the night in the ninth.

Apparently the Pirates offense was told that Bud Norris is the greatest pitcher to ever take the mound in a major league uniform, because they sure made him look that way.  Norris would set down the first nine Bucco batters before giving up a hit in fourth.  That hit would be a leadoff triple to Jose Tabata.  Surely Pittsburgh could score a run on a lead off trip-trip-triple, but not on this night.  Nate McLouth would pop out to third, Andrew McCutchen would ground out to short, which allowed Tabata to be thrown out at home, and then Cutch would get thrown out trying to steal second.

Just when you thought it could not get any worse than that, it did.  Now read this carefully, the Pirates had the bases loaded with no outs and the top of the order up.  Now seriously this is a professional baseball team, surely one of them could bring at least one run home.  Once again this is why this city can’t stand this baseball team.  Tabata, McLouth, McCutchen go down 1-2-3 without a single run crossing the plate.  Please hand Mr. Bud Norris the Cy Young award now, because he is the greatest pitcher to ever step on a mound.

Now you may be thinking, wow Zane are your days as a Pirates fan over?  Of course not silly, because after 20 years of losing, I have become numb to games like these.  I will wake up in the morning, realize the Buccos have a game, and for some crazy reason think they might just pull it out tonight.  Even better I will be at the game on Saturday.  Charlie Morton will look for something that hasn’t been seen in Pittsburgh since the first Bush administration and that’s run support.  Houston will look for another amazing performance from their rotation, this time in the form of J.A. Happ.  First pitch is at 7:05.