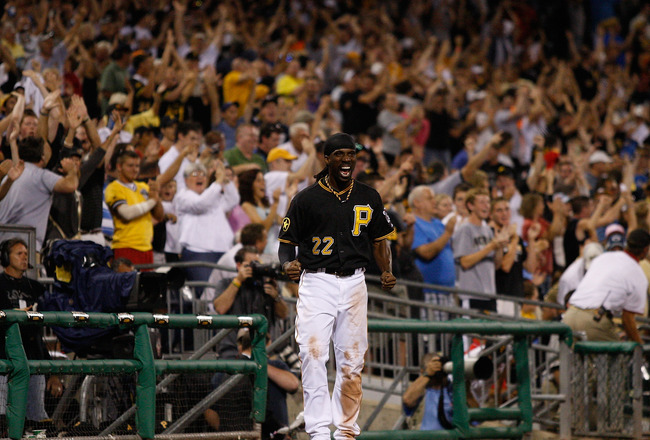 “Starting Opening Day, it’s ‘finish.’ Last year we were able to rekindle the city. Now it’s time to finish a play, finish an at-bat, finish an inning, finish the game and finish the season.”

Those words, spoken by Pirates’ manager Clint Hurdle, were the fighting words, the theme of the team’s Spring Training workouts and Grapefruit League season in February and March in Bradenton, Florida.

The Bucs played respectable baseball for the first four months of the regular season, and in doing so, created quite a stir around Major League Baseball. In fact, for a matter of weeks, the Pirates were battling it out, and on several occasions even surpassed, the Milwaukee Brewers and St. Louis Cardinals for the N.L. Central division lead.

As we all know, the wheels fell off after the All-Star Break, and a team that, at one point, had a 51-44 record, ended up losing dozens of games in all too familiar (and embarrassing) fashion on their way to a 70-92 mark. In the process, they secured their North American sports record 19th consecutive losing season.

That all sounds wonderful. But naturally, this type of mentality has been met with much skepticism…and rightfully so. After all, no professional sports team has ever endured losing to this extent, so it’s difficult to draw any comparisons to any other team in any other sport. That being said, the Bucs did make strides last season…they learned about winning and they learned about losing. They experienced both over-achieving and under-achieving at different times in the season, and they won games in which they underperformed while losing games they deserved to win. Those are all the trials and tribulations, the highs and lows of a 162-game MLB season, and with a young core of players who had yet to endure it, last year was a learning experience of utmost importance.

Tomorrow afternoon, thousands of baseball fans will embark on their annual trip down to PNC Park, decked out in their Steel City colors and motivated by a blind optimism that will never be as high as it’ll be on that day. That’s right, folks, tomorrow is April 5, 2012, Opening Day for the Pittsburgh Pirates.

The Bucs have had a busy offseason and Spring Training, but all those moves, trades, releases, acquisitions, etc., all boil down to the same question that has hounded the team since the early 1990’s: Is this the year they end the streak?

“The streak,” as all Pittsburgh followers know, refers to the 19 consecutive losing seasons the Pirates (and their fans) have endured since 1992. So aside from the regular naïve optimism of Opening Day, why else should any of us believe that this is the year the Bucs turn the corner?

First of all, it starts with leadership from the top. Do the Pirates have that? It looks like it…Clint Hurdle had an under-talented team playing well above its head for 2/3 of the season last year.

How about starting pitching? This is obviously a huge question mark at this point. They spent money (yes the Pirates) to bring in A.J. Burnett and Erik Bedard, and while Bedard has pitched solidly, avoided injury, and is even slated to being the Opening Day starter, Burnett is out two months with the orbital bone. Not exactly what the Bucs had in mind when they acquired him from the New York Yankees. The other starters, including Jeff Karstens, James McDonald, Kevin Correia, and even Charlie Morton, all had strong first halves in 2011 followed by terrible finishes. Which pitcher shows up this year? Only time will tell.

Bullpen? Joel Hanrahan proved to be one of the best closers in the league last season, and so far this spring, he’s looked just as effective and confident in 2012. The key will be if the Pirates are able to maintain a lead through innings 6-8 to even get the ball to Hanrahan. Guys like Evan Meek, Jason Grilli, and Chris Resop headline the slew of bullpen arms will always prove to be extremely valuable.

And that takes us to the offense. At the heart of the debate is Pedro Alvarez, the outrageously gifted third baseman who has underachieved (to say the least) at the big-league level thus far. Pedro is a strikeout machine right now, and while he’s shown the ability to hit for power, so far this spring, he hasn’t been able to hit anything. He is the key to the offense being good as opposed to average (at best). Andrew McCutchen, having just signed a new contract, looks to continue to progress from a star to a superstar, while Neil Walker, Jose Tabata, and Alex Presley, as well as new Buccos Clint Barmes and Rod Barajas, will all have vital roles in the Pirates’ quest for .500.

Pittsburgh will need to get off to a fast start this season, as they encompass one of the most difficult April schedules in baseball. After opening up with a three-game home slate against the Philadelphia Phillies, the Pirates travel out west for series against the Los Angeles Dodgers, San Francisco Giants, and Arizona Diamondbacks. Ouch. Fast start needed indeed.

There are those out there who believe the first half of 2011 was a fluke…a blip on dismal radar that is the Pittsburgh Pirates’ present and future. Conversely, fans and baseball lovers that long to see a winning team in Pittsburgh had their hopes rekindled with the hint of success last year. One thing can’t be argued, though. As we saw last season, if this team is competitive, people will watch…people will care. The Pirates were seven games over .500 in July last season, and fans were coming in droves down to PNC Park night in and night out.

Can the Pirates take the next step? Will they improve upon a small step in the winning direction from last year? Will they finish?

The journey begins this afternoon at PNC Park.