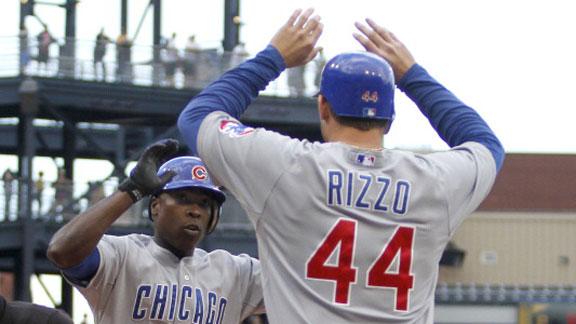 We’ve been hearing the past few weeks that the Pirates’ September schedule was light in comparison to other teams.  The Bucs entered this weekend very much in the conversation for the final N.L. Wild Card spot along with the St. Louis Cardinals and Los Angeles Dodgers.  But after taking two of three from the Houston Astros earlier in the week, the Pirates were outclassed and outplayed in every facet of the game this weekend, capped by a 4-2 loss to the Chicago Cubs this afternoon.

Alfonso Soriano hit a two-run go-ahead homerun in the eighth inning off Jason Grilli as the Cubbies clinched the three-game series sweep of our Buccos at PNC Park.

The Pirates had a great opportunity in the bottom of the ninth to tie or even take the lead, but with the bases loaded and two outs, Cubs’ closer Carlos Marmol struck out Gaby Sanchez and forced Pedro Alvarez to ground out to end the threat and the game, much to the dismay of the PNC Park crowd.

It was that type of a day for the Pirates today….blown opportunities.  In fact, as a team, the Bucs left a total of 28 runners on base, including Alvarez with seven, while Garrett Jones and Andrew McCutchen each left four on the bases.  It was a depressingly horrible ending to a torturous weekend for Bucs’ fans, as our Pirates were outscored 20-7 by the Cubbies, one of the very worst teams in all of baseball.

McCutchen got the Pirates on the board with a solo homerun, his 25th of the season, in the first inning.  After that, though, The Bucs’ offense was held in check throughout the afternoon.  In fact, the only other run they scored occurred on a balk in the seventh inning.  Brock Holt led the Pirates’ offense with three hits, while the rest of the lineup had four hits total.

The Bucs used five pitchers this afternoon, including starter Jeff Locke, who kept the team in the game throughout his six innings of work, giving up two runs on seven hits.  Kyle McPherson pitched a scoreless seventh in relief as well, and looked very sharp in doing so.  After Grilli gave up the two-run shot to Soriano, Chad Qualls cleaned things up in the eighth, and Joel Hanrahan pitched a scoreless ninth in the losing effort.

With the loss, the Pirates are now 72-67 on the season, and have fallen to 2.5 games back of the Cardinals in the Wild Card race.  The Bucs are sputtering at the wrong time of the season, and are now in serious trouble as far as the Wild Card AND a .500 campaign are concerned.  They will head out on a seven game road trip, including a three-gamer at Great American Ballpark against the Cincinnati Reds.