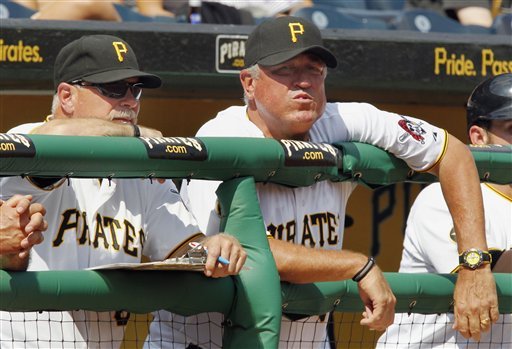 Tyson Ross started for San Diego and looked good over the course of his seven innings of work.  He allowed two runs on three hits, while striking out seven batters.  The two runs he would give up came in the seventh inning off of the bat of Andrew McCutchen when he hit a two run homer to right center.  Those would be the only runs Pittsburgh would score tonight.

Charlie Morton was equally impressive in his eight innings of work, allowing one run on two hits while striking out nine and walking three.  That lone run reached base because of one of those walks and would score on a fielder’s choice.

This game looked to be all but over in the ninth when Mark Melancon took the ball.  He would allow a lead off single, but then recorded two outs.  That final out however did not come until after the Padres put two runs on the board.  With a 3-2 lead, San Diego closer Huston Street would pick up his 31st save of the year by setting down the Pirates 1-2-3 in the bottom part of the ninth.

I know this team has had rough patches throughout the season and I know they have battled back each time, but come on guys now is not the time to be struggling, you are in a playoff race!  Tomorrow afternoon’s series finale is the definition of a must win game.  In order for this to happen, the offense will need to magically appear and Gerrit Cole will need to be on top of his game for the 12:35pm start.