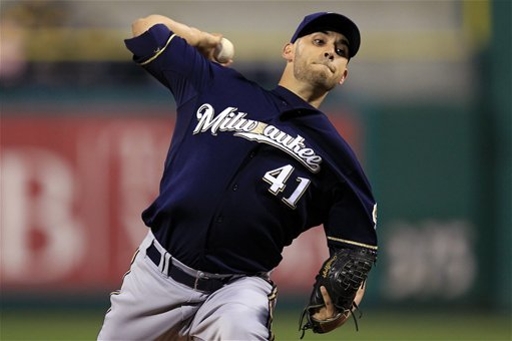 New night, same result for the Pittsburgh Pirates.  One night after being blanked by the Milwaukee Brewers, the Buccos managed a run tonight in their 3-1 defeat.

The Brew Crew jumped out to an early lead when Norichika Aoki homered to right field off of Pittsburgh starter Kyle McPherson.  McPherson was making his first Major League start tonight and only lasted 4 1/3 innings.  In that short time he gave up two runs on seven hits while striking out two batters and walking one.  His second earned run came with Chris Resop on the hill, Martin Estrada would single in Jean Segura.

Jeff Karstens came out of the bullpen tonight after leaving the rotation with a hip flexor injury.  He would go three innings allowing one run on two hits and striking out two batters.  That lone run came in the seventh when  Segura, who reached third on a misplayed ball by Andrew McCutchen, scored on a Brock Holt fielding error.

The Pirates offense was no where to be seen tonight, as they would collect six hits.  The lone run came in the ninth inning on a McCutchen solo home run.  Cutch and Pedro Alvarez each collected two hits, while the other two hits were shared by Michael McKenry and Travis Snider.

So will the Buccos offense show up tomorrow afternoon? Your guess is as good as mine.  Milwaukee will attempt to sweep the final series of the year between these two teams tomorrow afternoon at 4:05.  If they do, it will be the second series this month that the Brewers have swept Pittsburgh.