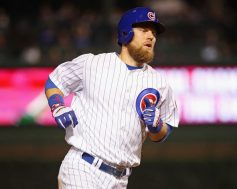 The Pittsburgh Pirates are still playing baseball, though it doesn’t have much meaning at this point.  For the second night in a row their offense only managed one run, while the Chicago Cubs had a breakout inning to put the game away.  After the final out was recorded, Pittsburgh would be the losers of a 4-1 game.

Chad Kuhl pitched 5.1 innings and allowed three runs on seven hits, while striking out seven and walking three.  All three of those runs would come in the sixth inning.  The scoring started when Ben Zobrist hit a solo homer to deep right center.  Alex Avila would single home a run later in the inning.  The final run would come via a Jason Heyward sac fly.

Jake Arrieta would hold the Pirates in check for six innings, striking out four and walking two.  The Buccos would score their lone run on a John Jaso solo home run in the seventh.  That would come off of Chicago relief pitcher Koji Uehara.  Pedro Strop, Brian Duensing, and Wade Davis would silence the Pittsburgh offense for the remainder of the game.

The Cubs would add one more in the eighth when Anthony Rizzo hit a RBI double to center field.  That would come off reliever Daniel Hudson, I was just as shocked as you were.  A.J. Schugel and Dovydas Neverauskas pitched a scoreless 1.2 frames to keep their team in the game.  Unfortunately, the Pirates offense was nowhere to be found.

The Buccos look to be playing for draft picks right now and why not.  They aren’t going to make the playoffs, so they might as well improve their draft position and sign another first rounder that will just end up disappointing us in five years.  No sense in ending that trend.  On a brighter note, Indianapolis and Altoona clinched playoff berths tonight.  Nice to see some kind of success in the organization.  This series will wrap up tomorrow night at 8:05pm.