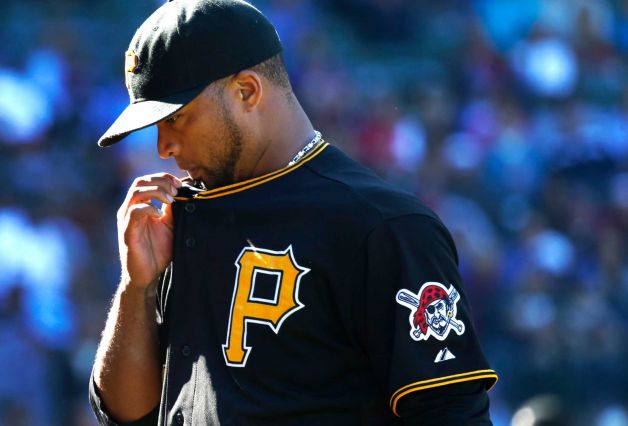 Well Pittsburgh Pirates fans, it all comes down to this.  After the Pirates fell to the Chicago Cubs, 4-2 this afternoon at Wrigley Field, they will head into the final weekend of the 2013 season needing to win two out of three games to secure home field advantage in the Wild Card playoff game.

This afternoon, both the Pirates and the Cincinnati Reds lost their respective games, and coupled with another win today by the St. Louis Cardinals, it seems all but guaranteed that the Cards will win the division and the Pirates and Reds will battle in the Wild Card one game playoff.

Francisco Liriano took the loss today (16-8), giving up four runs on eight hits through 5+ innings, including the three-run homerun by Darnell McDonald in the sixth, which was the difference in the game.  The Bucs had plenty of opportunities to score throughout the afternoon, but couldn’t come up with the big hit at the right time.

Pittsburgh did make things interesting in the top of the ninth.  Jose Tabata’s pinch hit RBI triple brought the Bucs within two runs with only one out.  But Marlon Byrd and Starling Marte couldn’t come through, making the final two outs of the game.

At this point…it’s simple.  Whoever wins the three-game series at Great American Ballpark this weekend will host the playoff game next Tuesday.  The Pirates know what they have to do, win two of the next three games and they’ll host a postseason game for the first time in PNC Park history.  After a day off tomorrow, it’s time to battle.