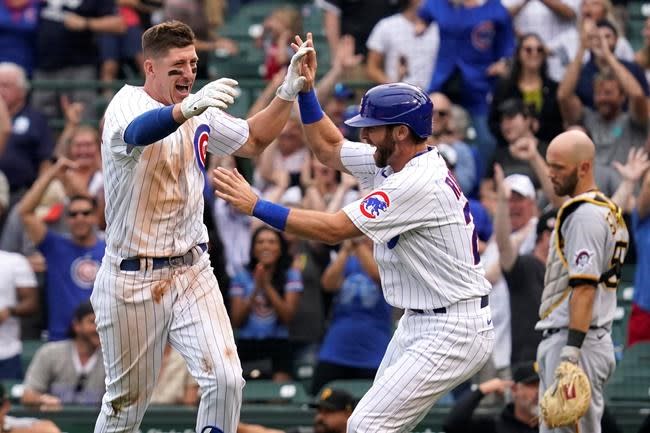 The Pittsburgh Pirates lost their fifth straight game on Saturday, a 7-6 walk-off defeat to the Chicago Cubs at Wrigley Field.

The Bucs held a two run lead heading into the final inning, but the Cubs rallied for three runs to secure their fifth consecutive victory.

JT Brubaker started for Pittsburgh and struggled through three innings, giving up three runs on four hits and two walks.  His mound opponent, Kyle Hendricks, lasted just 4.1 frames, giving up six runs on five hits and three walks.  Neither started earned a decision on the day.

Pittsburgh took the early lead when Yoshi Tsutsugo hit a solo homerun in the top of the first inning.  The Cubs responded with three runs in the fourth inning.  Matt Duffy’s single tied the game, and two RBI groundouts by Jason Heyward and Sergio Alcantara made it 3-1.

A bases loaded walk to Colin Moran in the fifth made it 3-2 Cubs, and when Anthony Alford was hit by a pitch and later a wild pitch allowed two runs to score.  After Wilmer Difo singled home a run, the Pirates led 6-3.

Frank Schwindel’s solo homerun in the bottom of the fifth made it 6-4 Bucs, but Pittsburgh held onto the lead from there on out….until the ninth inning.

The rally started with a RBI single by Alfonso Rivas which cut the Pirates’ lead to a single run.  A single by Rafael Ortega tied the game, and a single by Schwindel gave the Cubs the walk-off victory.

Obviously, this was a tough one to swallow for Pittsburgh.  They had a sizable lead heading into the final inning, only to lose the game.  These two teams, while certainly on the outside looking in at the playoff picture, are heading in two different directions.  The Cubs have won five straight while the Bucs have lost five straight.  The Pirates will try to snap their losing streak and avoid the series sweep in the final game of this weekend series on Sunday afternoon.